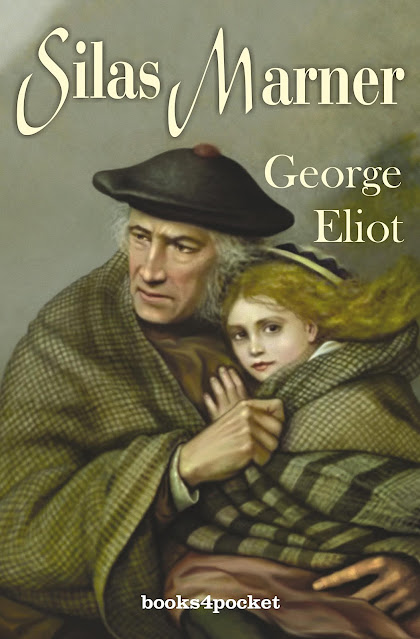 A month ago I was looking for a movie to stream and came across one called “Silas Marner.”  That title rang a bell because I remembered the name from a literature class I took in high school a half century ago.  Although I remembered the name, my mind was totally blank concerning anything about the story.

The 1985 film starred Ben Kingsley as Silas.  It was very realistic, set in the early 1800’s.  The film sucked me right in and I enjoyed watching it.

Shortly after seeing it, I was looking through books I could download to read on my iPad and once again came across the title, Silas Marner.   I was intrigued and curious about how closely the film had followed the novel, so downloaded the novel and began reading.  I discovered the film followed very closely to the storyline of the book.

Silas Marner was published in 1861 by George Eliot, whose real name was Mary Ann Evans.  She wrote under the name of George Eliot because she didn’t want her novels to be stereotyped as those typically written by women at the time.

Silas Marner, the main character was an honest, hardworking weaver, who was a member of a Calvinist religious sect in a factory town in Northern England.  He was about to be married to a woman, also in the sect.  Silas suffered from a very mild epilepsy that caused him to periodically black out remaining motionless for a time, not aware of what was going on around him.

One particular night when he was assigned by the sect to watch over the bedridden, dying leader of the sect.  Silas fell into one of his spells and when he came through, the minister was dead.  Later he learned that the sects money had been stolen and his pocket knife was found on the sight of the robbery.  Silas, of course, was blamed for the theft.  Proof as to whether he was the thief or not,  was determined by the congregation drawing lots.

When the lots were drawn, they indicated Silas was guilty.  He was kicked out of the sect, which was his whole community.  His wife-to-be dumped him and ended up marrying his best friend, who was the one who had secretly stolen the money to frame Silas.

It all left poor Silas a totally broken man.  He left the industrial town and all of his former friends in the church and settled far away in a small rural town.  He made his living by weaving and selling the fine linen that he had woven.  He lived alone in a small cabin, isolating himself from the local community.  Everyone there began to think of Silas a strange hermit-like person and he was sometimes ridiculed.

In his lonely life, his only joy was counting the hoard of the money he was making from his weaving.  One night when he had ventured outside his cabin, all of that money was stolen.  The community tried to help him find who had stolen it, but some of them questioned whether he really had that much money in the first place.  The theft, further depressed Silas.

The son of the local aristocrat, had secretly married a woman who became an drug addict.  She had a infant girl child from the marriage.  Her husband became tired of supplying her with money for drugs and regretted the secret marriage that was preventing him from marrying a beautiful wealthy woman who liked him.

The druggy wife got fed up and carried her daughter through the snow to confront her husband at a New Years Party, but she collapsed and died of hunger/cold just outside Silas’s cabin.    Her toddler daughter, managed to walk into the open door of Silas’s cabin, where he discovered her.

Silas found the corpse of the mother in the snow and went to the party to get help.  No one knew about the marriage or who the father was, but because the toddler ended up at Silas’s house, he felt like it was a preordained gift and so he kept the girl and raised it as his own.  The girl gave meaning to his miserable life and Silas slowly began to become part of the world again.

This is only the first part of the story, but I will stop there.

I really enjoyed reading the touching story about Silas Marner, and went on to read The Mill on the Floss, another of George Eliot’s novels.  I enjoyed reading it too until I got to the  disappointing ending.