The Power of Suggestion, Example Two 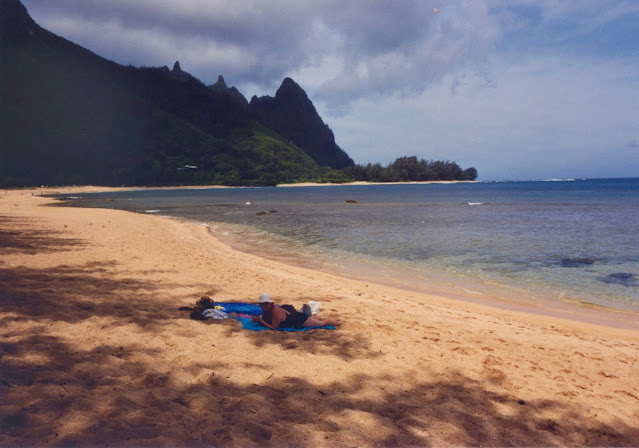 In 1991 we travelled to Hawaii to visit relatives and to watch the eclipse of the sun.  While there, we decided to take an excursion to the Hawaiian Island of Kauai for a few days.  We had purchased some snorkels and were eager to try them out, so while there, we drove to Tunnel’s Beach, which was supposed to be one of the best snorkeling areas on the island.

It was a beautiful tropical beach with crystal clear water.   There were very few people there, and as we gathered up our snorkels from the car and walked toward the beach, I thought I overheard some of those on the shore mention something about a Moray Eel.  A moray eel is a pretty scary underwater predator with a bad reputation that is sometimes found in coral reefs.  It is not something I cared to see.

Snorkeling at Tunnel’s Beach is a memory I will carry with me for the rest of my life.  The reef was huge and a lot of it was in very shallow water.  I was swimming around in water that only seemed about 2 feet deep (60cm).  Everywhere I could see numerous amazingly colored fish swimming, some alone and some in schools, and darting around as I carefully stroked my way through the shallow water, careful not to scrape against any of the coral, knowing that could cause nasty infections.  I was also very vigilant and kept an eye out for any moray eels.

As I was slowly gliding my way through the water, suddenly something grabbed my leg.  Close to having a heart attack, I sprung from the water and turned around expecting to see blood spurting from my leg, where a moray clung.  Instead, I saw my wife, laughing at the trick she had played on me.

Overhearing the discussion of the moray as we had walked to the beach, had planted the moray eel thought in my brain and even though it didn’t stop me from snorkeling, as I was swimming along, completely distracted by all of the colorful fish around me, that moray was still lurking there in my brain.

One of the really memorable things about the snorkeling was the feeling of floating.  As I snorkeled further out from the shore, the reef slowly got a bit deeper, maybe four feet, then suddenly to my surprise, it just disappeared, leaving dark water below me.  It was such a strange sensation to remain floating along when suddenly the floor disappeared below me.  It seemed like I ought to fall too.

It was an amazing snorkeling experience just like all those underwater nature documentaries, despite the near fatal heart attack I had when my wife grabbed my leg.