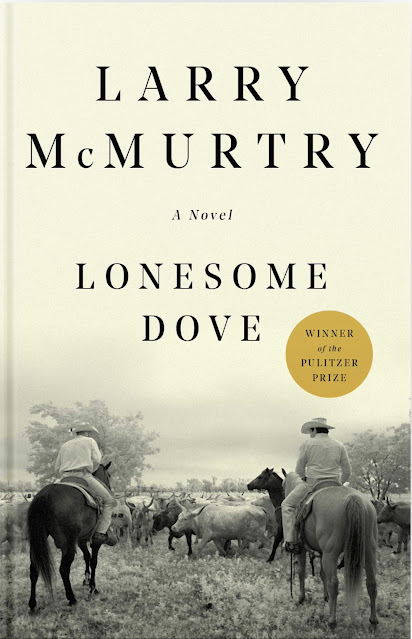 The theme for December’s Book Club at the McBride Library was “Reread your favorite book”  When I was faced with choosing an old favorite book to re-read, I was stymied, unable to think of anything.  I have read so many good books and trying to pick out a favorite seemed impossible, then looking through my library on my iPad, I came upon Lonesome Dove by Larry McMurtry, and I instantly knew my problem was solved.

I had never been keen about reading a Western, but once when visiting my mother, an  avid reader, I had finished the book I had brought with me, and my mom suggested and praised Lonesome Dove suggesting I read it, and she still had the paperback.

I was very unenthusiastic about doing so, because of the stereotype I had of cowboys and shoot-em-ups, however, I was without a book to read and was desperate, so I began in on Lonesome Dove.  The story had been turned into a miniseries on TV, something I was unaware of, and so I started with a blank slate; without any preconceived perceptions of the story or its characters.

I quickly discovered that the book’s title (which I hate) came from the name of a small, dust-blown,Texas town situated in the desert, located beside a near-empty shallow river that marked the Texas-Mexican border.

The settlement was a ramshackle, well-past-it’s-prime, western town consisting of about ten buildings.  The first part of the story takes place in Lonesome Dove, in the stifling desert heat on the porch of the Hat Creek Cattle Company house, or in the old saloon.  The novel’s characters center around Call and Augustus, the owners of the Hat Creek Cattle Company, the handful of cowhands they employ, the saloon owner, piano player, and Lorena, the town prostitute (whom all the males in town are in love with), and later Clara, the woman Augustus can’t forget.

Both Call and Augustus, who in their prime had been heroic Texas Rangers famous for fighting the Indians, are now older men, living very stayed lives, running the non-impressive cattle company.  Jake Spoon, a previous employed cowhand, who is fleeing after accidentally killing a dentist in Arkansas, returns to Lonesome Dove and mentions to Call, the money that can be made by being the first to herd a big head of cattle to the wilderness of Montana.

This suggestion intrigues Call, who is the serious, no-nonsense partner of the company, and he begins to set his mind on doing just that, much to the chagrin of his lazy partner, Augustus, and the other cowhands including Jake Spoon, who was the one who suggested the scheme, who would all rather just stay in Lonesome Dove and stare at, dream about, or have a visit with Lorena.

Call has his company sneak over to Mexico one night to steal a big herd of cattle and horses, most of which the Mexicans had previously stolen in Texas, and then Call begins to organize a big cattle drive to Montana.  It is on the this cattle drive where all sorts of unexpected incidents occur, some which are  very shocking, and others touching.  The cattle drive occupies most of the middle part of the novel.

Larry McMurtry, who died in 2021, was a talented writer, famous for creating stories that became the films: “The Last Picture Show” and “Terms of Endearment”  I really like the way he has written Lonesome Dove.  His style is easily read and is both descriptive and humorous, but mostly it is the characters he has created that I enjoy so much.  The characters in the novel have become real, memorable, and endearing to me.  I think Augustus and Clara are two of the most memorable characters I have ever run into in a novel.

The cowhands are just a group of flawed and lonely individuals, all secretly lost and struggling.  Call is insular and quiet, Augustus, drives everyone crazy because he just can’t stop talking and commenting on everything.  Lorena, who has had to live a tough life, just wants to escape her present situation in the one horse town, and dreams about going to San Francisco.  Clara, the woman Augustus never got over, chose a life with another man.  One of the things I like so much about the novel is how of all of these tough looking cowboy-types are actually more like kids, shy and scared of women.

If you are prejudice against reading a Western like I was,  maybe you should give Lonesome Dove a read.  You might, like me, discover some unforgettable characters and be entertained with a novel where unexpected things, keep you reading.