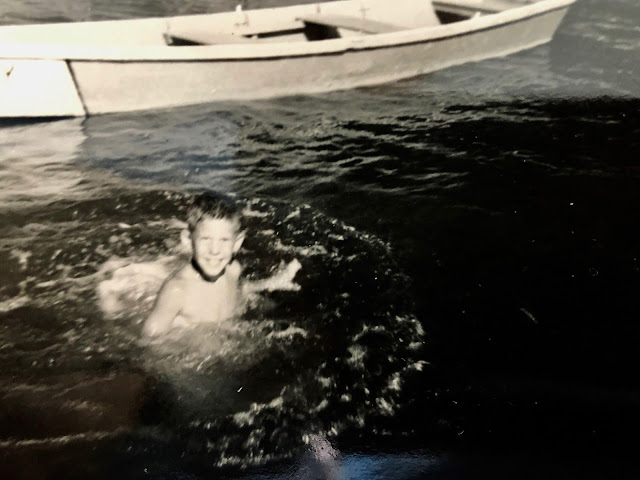 From as far back as I can remember, I loved being in the water; splashing around and putting my head under to explore, but in those early days, I always kept my feet anchored securely on the bottom.  My sister and I loved to go on picnics, because picnics generally meant going to some place where there was a lake and a chance to go swimming.

Sometime during the 1950’s my parents came upon an announcement from the Evansville YMCA, that they were offering swimming lessons.  Knowing how to swim is a very important life skill, so they signed their skinny young son up.

I don’t remember exactly how long the swimming lessons lasted, maybe two weeks, but however long it was, my parents conscientiously drove me down town to the aging YMCA building that had the indoor pool where the lessons were held.  Because I loved to swim, I eagerly held the towel rolled around my swimming trunks, tight to my chest, as I entered through the big doors of the YMCA.

I followed the other boys to the change room, left my towel and clothes in the locker, pinned the locker number key to my swimming trunks, then like the others, stood impatiently under the shower for a minute as instructed, before following the scent of chlorine to the pool.    As I remember it, the pool was located in a lower floor of the building with windows higher up on the wall.

The entire swimming area was lined with tile and the sounds of the playful screams of us boys  reverberated from the walls.  The pool had blue tiles of course and featured a rope with white and red floats strung across it at its midpoint, separating the  shallow half from the DEEP WATER.

Happily for me all of the lessons took part in the shallow half of the pool, where I could stand with my head out of the water and my feet on the pool bottom.  Learning to swim was enjoyable.  The lifeguards handed out some kick boards and we were shown how to hold them in front of us as we kicked our feet, propelling us though the water.  It was great fun and the whole group of us practiced with the kick boards, chaotically traversing around through the shallow end like a bunch of bumper cars.

Next day we were instructed to stand in the pool laying our upper bodies on top of the water, then stroke with our arms, with our face down in the water, periodically turning our faces up to catch a breath, then putting the face back into the water, repeating the movements over and over.  We soon graduated to stroking our arms and at the same time we were kicking with our feet, propelling us short distances through the water, and being in the shallow end of the pool, we could always stop and stand when we were tired.

It was demonstrated how to make shallow dives from the edge of the shallow end of the pool into the water.  This was an exciting skill to learn.  The swimming lessons always included some “Free Time” where we could practice the techniques we had learned or just clown around in the water.

One day our lesson was cut short when everyone slowly began to cough.  More and more of us started leaving the pool, choosing to sit along the edge, hacking and coughing.  Fortunately one of the instructors finally realized that the mechanism that put chlorine into the water, was malfunctioning and was putting too much of the poison into the pool.  We all were told to leave the pool area, get dressed, and go back home.

On the last day of our swimming lessons we were set to take the SWIMMING TEST.  When I  entered the pool area, I noticed that the rope that separated the shallow water from the DEEP WATER had been removed.  We were told that one by one, each of us had to dive into the DEEP WATER, swim the whole length of the pool to the shallow end, and then having passed that test, we would receive a certificate.

I was terrified.  It didn’t help my confidence to have to sit there watching the other boys dive into the DEEP WATER.  Some would swim and others struggled.  Those, full of confidence, made it look easy, but others panicked; flaying and splashing their arms in desperation, until they were rescued by a lifeguard.

With all of my insecurities, I knew which type of boy I would be, so I hung back along the side of the pool, trying to look invisible, fearing the moment when my name would be called.

Luckily, all of those fears I had were in vain.  I would like to tell you that I bravely dived into the DEEP WATER, swam across to the far end of the pool, and got my certificate, but that didn’t happen.  Instead my prayers of desperation had been answered and the time allotted the last swimming class ran out before my name was called.  Happily, I went back to the locker room and got dressed, instead of having to be rescued by a lifeguard.

Even though the swimming class was over and I failed to get a certificate, I did learn to swim.  Using all of the skills and instructions I had learned in the swimming lessons, every time our family went on a picnic by a lake (below), I practiced and taught myself how to swim and eventually became comfortable about being in the DEEP WATER. 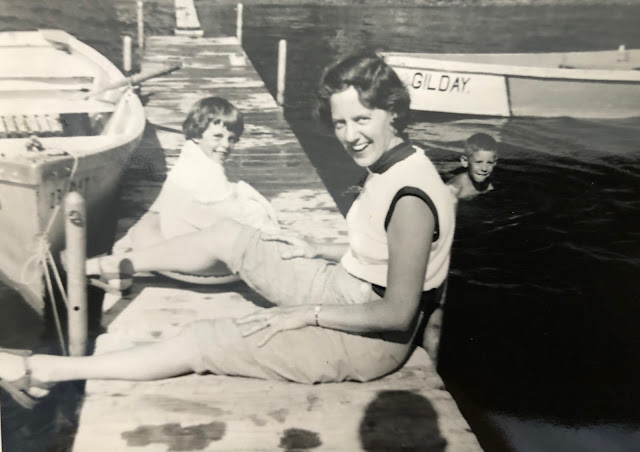 ted the last swimming class ran out before my name was called.  Happily, I went back to the locker room and got dressed, instead of having to be rescued by a lifeguard.

Even though the swimming class was over and I failed to get a certificate, I did learn to swim.  Using all of the skills and instructions I had learned in the swimming lessons, every time our family went on a picnic by a lake (below), I practiced and taught myself how to swim and eventually became comfortable about being in the DEEP WATER.