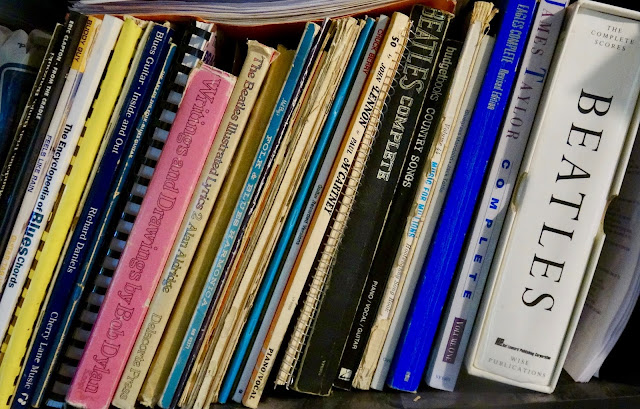 Having just gotten a turntable has reminded me of my youth and how much I depended on a record player.  My parents, who wanted me to learn music, had me played the trombone during elementary school, but it was something that I really didn’t care about.  I hated all the practicing I had to do every night.   However in about 1962, I developed an intense interest in Folk music, and really wanted to learn how to play the banjo, so I saved my money from my lawn mowing and tomato-picking jobs I had and ordered a banjo from the Sears catalogue.

When it arrived I bought a book of banjo chords and a folk song book that showed what chords to play.  After learning the chords and messing around with it, realized that the banjo I had purchased was a 4-string tenor banjo and not a 5-string banjo, that I loved hearing so much in Folk Music.  I hadn’t realized that there were two types of banjos.

I found an ad in the back of a Folk Music magazine for 5-string banjo necks (extra long, Pete Seeger style).  I bought one and convert my tenor banjo to a 5-string.  I practiced and learned enough to play the banjo in a folk group some friends and I formed in high school.

I spent most of my playing and alone in my room and I soon realized that a banjo by itself wasn’t very satisfying.  I figured a guitar was much more versatile than a banjo, better suited and satisfying when playing by myself, so I bought a guitar and started to teach myself how to play it.  I was never able to take any music lessons.  I was motivated enough just to make myself figure things out.

I taught myself both banjo and guitar by buying books that showed the chords and a songbook that showed what chords to play when.  I played by ear, not reading the music.   Hours and hours were spent alone in my room messing around and practicing on the banjo, then later, guitar.  Every time I saw someone play a guitar on TV or in person, I watched very carefully what they were doing, then tried to do the same thing with my guitar.

If I wanted to learn a song I liked, but didn’t have a book for to show me the chords or lyrics, I had to play the song on the record player, over and over.  I would figure out which key the song was in, which made knowing what chords to play, easier.  To learn fancy picking, I would put an album on and play the song at half speed, ie. if it was a 33 rpm record, I would play the song at 16 rpm, thus slowing the picking down so I could better figure out what was being done.

Getting the lyrics to a song meant listening to the song over and over on the record player; writing down a few lines, listening to it again, writing more lines down, repeating the process until I got all of the lyrics to a song.  It was all very time consuming.  The earlier music books showing songs I liked, were a rip-off.  They would show the songs using very difficult chords, and I would have to transpose the chords into easier chords (the chords that the artists actually used.)  Later books that were published did show the actual chords as well as lyrics to a song, but they were very expensive, but made learning a song was a whole lot easier and quicker.

These days things are a piece of cake:  All one has to do is do a search on the internet (name of song, chords) then the song pops up with lyrics and chords.  Also videos abound, showing how to play the song and the fancy bits.  It is all so much easier than what I had to go through.