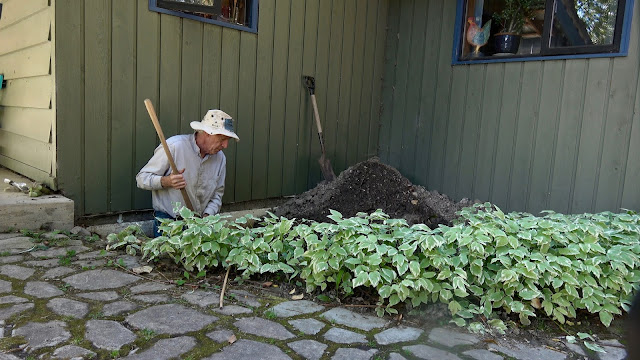 For months now I have been in a hole, a really bad funk, a depressing state of mind.  It is centered around my most hated household maintenance chore---PLUMBING.

When I did the original plumbing in the house I put in a turn-off valve, then a short metal pipe which was connected to a pressure reducer.  Because I have get our water from a high waterfall, it has about 80 psi of pressure by the time it gets to our house.  That much pressure needs to be reduced.  A problem developed because I failed to clean out the pressure reducer filter for years and years.  Then I became afraid to try to clean it because all of the metal was getting very rusty and corroded.  I feared it would break if I tried to mess with it.

This summer the water pressure in our house fell to a dribble because the pressure reducer is all clogged up.  Instead of me trying to replace the reducer, I thought I’d hire a plumber, someone who probably had experience with dealing with rusty pipes.  So two months ago I called the local plumber, who sounded positive about the job and asked me to text him a photo, which I did.

I got no response.  I waited and waited.  I assumed he was just too busy, but as the summer when by I started getting worried.  I thought maybe I should “sweeten the pot” and have the plumber also put in a curb valve (a turnoff valve outside of the house).  I figured a bit more work would put me higher on his priority list, so I phoned him and he told me he had put in curb valves before.

I started digging down to where the waterline enters the house.  It was a horrible job.  The dry clay was like digging through concrete, but I finally found the waterline, but figured I would need a mini-backhoe to enlarge the hole so the plumber could more easily do the job.  I texted the plumber telling about the needed backhoe, (I had heard he had a mini-back hoe.)

But still I got no response from the plumber.  I was becoming extremely frustrated as it became more and more evident that the plumber was never going to show up or even offer the common curtesy of telling me that he wasn’t ever going to show up, so I finally accepted the fact that I was going to end up having to do the plumbing myself.  Many a night I woke up and couldn’t go back to sleep worrying and trying to figure out how I was going to do the job.

On one of those nights I had a revelation:  The water comes into the house in a plastic PVC pipe.  Instead of having to deal with trying to undo the rusty pipes, I could just cut through the plastic pipe and not have to deal with all of the corroded parts, just remove and replace them.   It did mean our shared waterline would have to be shut down for a day, so the other three families would be without water while I did my work.

That hasn’t happened yet.  I am still struggling to plan out and buy all of the many pieces of pipe, adaptors, and fixtures I will need to do the job.  That in itself is hateful task that I don’t enjoy.  Because I hate plumbing so much I am having a hard time making myself deal with it.  I am really pissed-off at the plumber, who led me on and then left me hanging on for two months.

I will not be putting in a curb valve, so the hard-fought hole I dug in the flower garden is now totally  unnecessary and I will have to just fill it back up again.