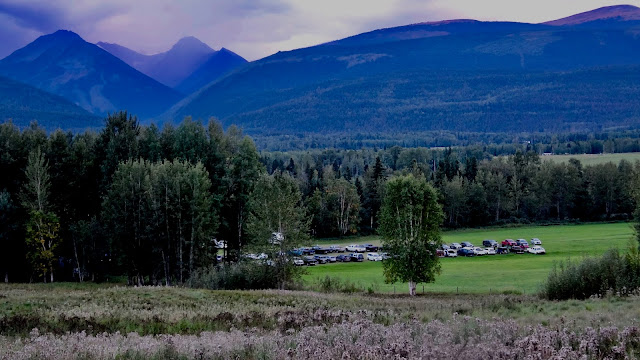 Friday was the memorial gathering for Bob Elliott, a friend I used to work with for years at the Forest Service.  Unfortunately I had an appointment in Prince George which lasted longer than expected, so we were late in getting back to McBride for the event.  As soon as I got back home I left for Bob’s memorial, hoping that it was still going on.

Fortunately, it was just down our road so I didn’t have far to go.  I didn’t know exactly where it was being held, but there where signs along the road which I followed.  They took me down the road beside, and then behind, the cement yard.  I had never been down there before and didn’t know what to expect.  I rounded a curve that overlooked the valley bottom below; full of cars parked in a hayfield.

It was a beautiful setting which made me feel really good.  Bob was a popular guy in the area and that was evident by the large turnout.  Once I had parked, I wandered over to the groups of people socializing.  By the time I arrived, the organized part of the memorial had finished and so I just entered into the conversations.  I mostly sought out my old co-workers from the Forest Service.  I was cheered to see Grant there, someone whose company I had always enjoyed, who had moved away and I had not seen for more than twenty years.

There was a picnic type dinner served and people ate under the large tent as dusk began along with a light shower.  I was very impressed with the community’s good-bye to my old workmate.