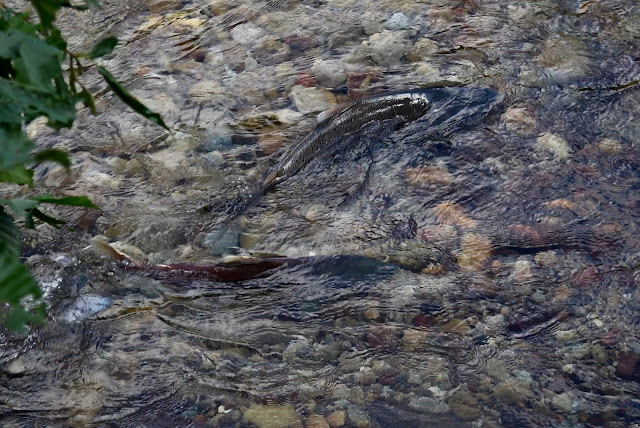 Every August the Robson Valley is the destination of one of nature’s most remarkable events; the migration of the Chinook Salmon.  These are huge fish, 10-50 lbs. (5-22kg), the ones in the photo were probably close to 30 inches (75cm) in length , after spending 4-5 years in the Pacific Ocean, they enter the fresh water of the Fraser River and have to fight against the raging currents to swim 1,350 km (840 miles) to the place of their birth to lay eggs.  The swim takes them 3 months and they don’t eat during that time.

By the time they arrive, their bodies are pretty battered up and almost totally devoid of energy, but they have one job left to do:  lay eggs.  The female swims around making a depression in the gravel, lays her eggs, and the males fertilizes them.   Once this job has been completed, they die.  It is always with wonder and sadness that I watch this event.

One of the best spots to view the spawning salmon is George Hicks Park, beside Highway 5 in Valemount.  We were in Valemount yesterday, so when down to see the salmon.  We saw only one pair of Chinook Salmon spawning.  I assume these were the early arrivals.

A few years ago there was a massive landslide across the Fraser River down South that became a major roadblock to the migrating salmon.   An effort to remove the slide debris has been in steady, but has not yet been completed.  To allow the salmon to migrate, they have been caught, trucked or helicoptered passed the blockage, then released to continue their journey, but of course, not all the salmon can be helped, so the numbers that can return to lay their eggs has been greatly reduced.

View  my paintings at:  davidmarchant2.ca