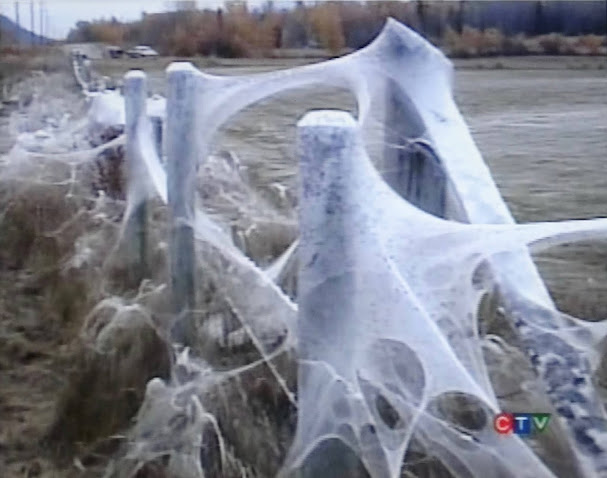 Yesterday I showed you some photos of some spider webs.  Every time I come upon a spider web my mind flashes back to November, 2002 when McBride got its 15 minutes of fame because of an extraordinary explosion of spiders in a field near McBride.  The event made not only the national Canadian news but also international, in the “freaky events” slots of some world news broadcasts.  The photo above, showing some of the spider webs, is from a video I shot and sold to a Canadian Broadcaster.

I had noticed the webs in the field, which lies right beside the highway, east of town.  One Saturday morning, we drove out with some friends to the effected field to take a closer look, and I made a video.  It was an amazing sight.  The thousands of spiders had built webs on top of spider webs, on top of spider webs.  The fences looked the most dramatic, but the whole field was also covered with low-lying webs.

I was so impressed at the sight that I contacted Discovery Channel Canada and sent them some stills I made from the video, showing the amazing spider webs.  They didn’t contact me, but must have passed on the message to their parent company CTV, who phoned me and said they would like to have the video for the evening news, and they would pay me.

I ended up taking most of a day off work at Forestry, so I could drive up to Prince George to the university, where they had a connections that could transfer the video to the station (technology is much easier and improved these days).  That night, when I got back home, I sat, ready to record with the VCR, when the news item came on.  The clip did get play all around the world, in the bizarre section of the news broadcasts.  I got $200 for the video.

Unbeknownst to me, Matthew Wheeler, a friend and local photographer, was doing the same thing and he had photos published in The Globe and Mail, the big Toronto newspaper and his video played on another network.   He was surprised to see my video on the news and I think he was a bit taken aback, because he thought he had a scoop. 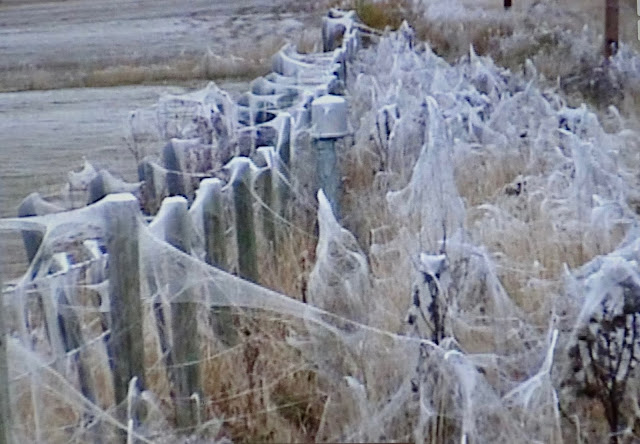