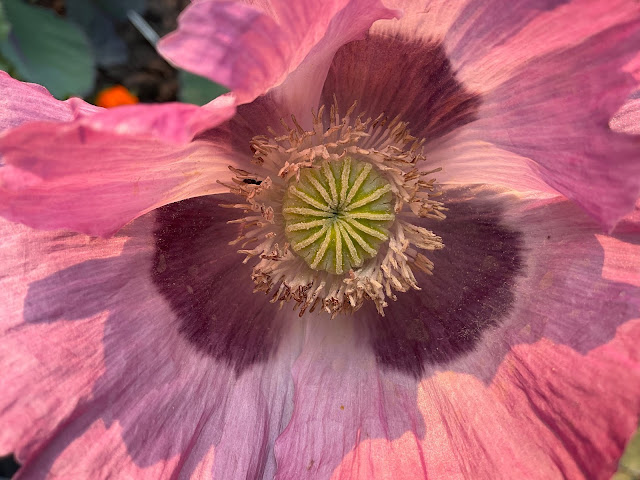 I use an iPad a lot and recently I bought myself a new bigger (12.9 in.) one.  It was advertised as having a sophiticated camera system (photo below), but I didn’t really buy it for the camera, I wanted an iPad the size of a small laptop computer that I could easily type on (I also bought the combination keyboard/iPad cover.)   I had previously bought a laptop but couldn’t get used to using the touchpad so returned it.  I kept touching the laptop screen to do things because I was so used to using an iPad.

Anyway, I really hadn’t made use of the iPad camera until yesterday when I was walking past the garden and noticed a poppy and thought, “I should try out the camera on my new iPad,” so I went into the house to get it.  When I took a photo and took a look at it, I was amazed at the intricate details of the flower.  In the photo above you can’t really see the tiny details in the picture due to the reduction of the resolution, but on the 12” iPad screen it was truly striking.

Of course, using a big iPad to take photos is pretty awkward.  I found the iPad difficult to hold when taking a photo and it would certainly be a pain to carry it with you when outside hiking around.  A regular camera is a lot more convenient and easier to use, but I certainly the photos taken on the iPad are really impressive when viewed on the iPad.