Deja Vu at the Airfield 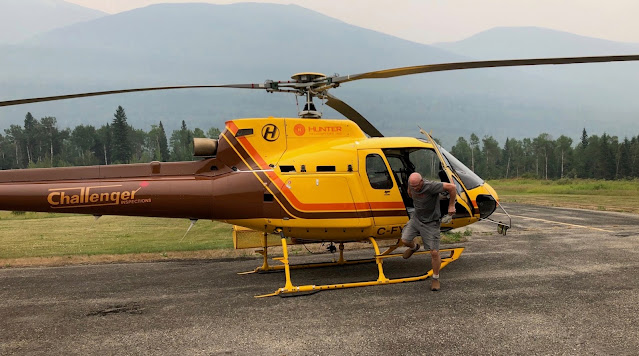 Remember last week when we were walking Kona at the air field and a plane landed seeking fuel, well it happened again on Sunday.  We were halfway down the runway when we heard the chopping sound of a helicopter, then through the smoke ww saw it heading toward us.  We got over to the grass on the side of the runway and watched it fly over, then land at the far end of the tarmac.

When we finished our walk, we said hello to the pilot, who was just sitting in the chopper with his door open.  He told us the place sure looked deserted and then asked where everybody was.  I told him there was nobody that stayed around on the lonely air field, and we were there just walking our dog.  He then commented that he needed fuel and I showed him the phone number he needed to call to get Kelly out to give him fuel.

I’m not sure where he had flown in from, it was not a helicopter company I was familiar with, but he was headed down to Oliver, BC to fight forest fires.  Oliver is in BC’s Dry Belt and has active fires.  It is 290 miles south, near BC’s southern border.

Once the pilot got Kelly on the phone, we got in the car and left.