So That's Where You Are 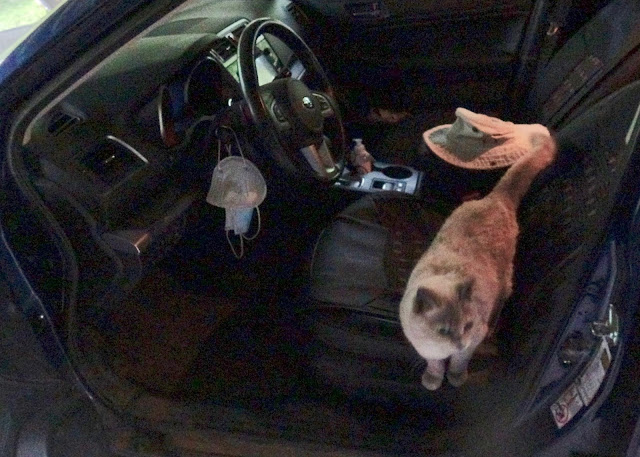 We drove up to Prince George yesterday and when we got back home and opened the door, Lucifer our cat came out, happy to be out of the house.  We then opened the tailgate of the car and began the long process of unloading the things we bought on our trip.  A few hours later after we had eaten, we realized that we hadn’t seen Lucifer for a while so I went out and called.  She is generally really good about coming when I call, but she didn’t show up.

I kept calling and started to check all of the places we sometimes find her:  the roof of the house, the balcony, the shop, and the barn, but she was not to be seen.   I was starting to get worried when my wife opened the car door to get something she had left there, and what did she see?  Lucifer, content and happy lounging in the car.  I guess she climbed in when the tailgate was open and made herself comfortable.

We have a regular routine at night before we go to bed.  We walk the dog one last time and make sure Lucifer is inside the house before we secure the door.    I was sound asleep at 12:30 when I awoke hearing meowing, some of which sounded kind of muffled.  Lucy likes to sleep in my open electric guitar case, and my first half-drowsy thought was that the lid of the guitar case had fallen closed and trapped her inside.  I turned on the light, but that wasn’t the problem.

The meowing continued until I realized that it was coming from outside the house.  I went to the window and discovered that Lucifer was out on the roof.  Obviously something had gone awry during our pre-bed routine and Lucy had been locked out of the house and had finally had enough foolishness and wanted back into the house.  I opened the window and let her in.

She was happy to be back in the house again and cuddled up tight against my thigh as I lay in the bed, triying to go back to sleep.