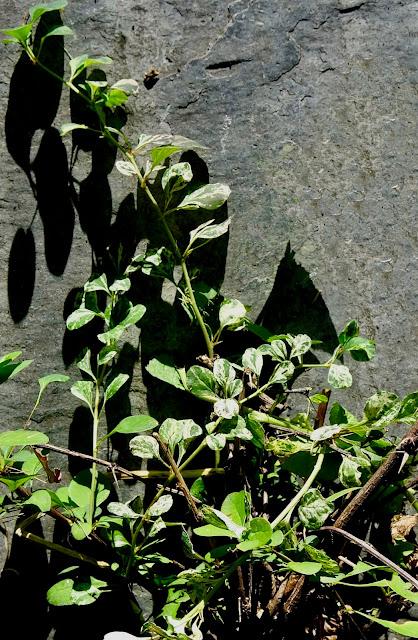 About 4 years ago I saw a an interesting bush at a nursery and bought it.  It was a Japanese Barberry.  It had striated leaves that turned pinkish in the fall, and I thought it would look attractive beside the house.  The next summer the small Barberry was pretty much overtaken by my Hostas and Day Lilies, but it survived.  The same thing happened every year.  Because of where it was planted, it didn’t get a lot of moisture from the rain, so I babied and watered it so it could develop.

I really hate invasive plants.  I have spent hours every summer trying to prevent the spread of Canadian thistles.  Hawkweed in my lawn spread to quickly to stop.  When I heard that Purple Loosestrife, an attractive and vigorous flowering plant that someone had given us, was invasive, I ripped it out of the flower garden.  It chokes out native plants along waterways.  Anyway, you get the picture, I try to do my part in preventing the spread of these invasive plants.

The other night I came across an article about invasive plants and in reading it, saw the name “Japanese Barberry”.  “What?”  That’s the plant we have beside the house that I have been babying for years.  The very next morning, the first thing I did was to dig it out and put it in the wood stove to burn.

What is the problem with Japanese Barberry, you might ask.  Well, I guess it spreads easily, has prickly spines, so it creates nasty, rambling barriers for wildlife and people, and it seems to be a favorite shelter for mice, who carry ticks that then climb up on the leaves to catch passing animals.  This includes ticks that spread Lyme Disease.

Who needs a plant around that causes so many problems.

It makes me really mad that stores are allowed to sell plants and animals (like exotic snakes) that are invasive and get away, causing so many problems.   At least my Japanese Barberry isn’t going anywhere, except up the chimney as smoke.