The Last Bookshop in London by Madeline Martin 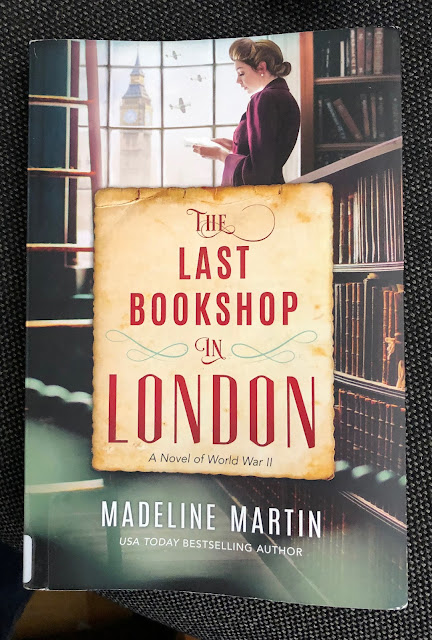 This comfortable read was a well-constructed historical fiction built around “the Blitz” of Britain.  The storyline follows Grace Bennett, a shy young woman who had been working in a northern English town at her miserable uncle’s store while living with his family after the death of her mother.  After becoming fed up with her situation, she along with Viv, her lifelong friend, take advantage of an offer from her mother’s best friend to move to London and live at her place.

She and Viv arrive in London, in August, 1939, just before Britain declares war on Germany.  Their excitement about moving to the big city is somewhat dampened by all of the preparations for war that they see.  They are greeted warmly by Mrs. Weatherford her mom’s friend, in whose home they will live.  Viv has typed up some fake reference letters to help her find employment, but ethical Grace refused Viv’s offer to type up some fake letters for her.

Viv’s letters succeed in getting her a job at Harrod’s Dept. Store.  Without any reference letters from her miserable uncle, Grace’s job-seeking must be helped along by the strong-willed Mrs. Weatherford, who pressures the owner of a book shop, to get Grace employed.  Elderly Mr. Lewis, owner of the shop, didn’t really want an employee, but submits under the pressure of the willful Mrs. Weatherford.  Grace is not very enthusiastic about working for the taciturn Mr.Lewis, whose shop is unkempt, dusty, unorganized, and chaotic.

Another reason for not being motivated about her new job is the fact that Grace has never had time to read, or enjoyed doing so, but she is happy to find some temporary employment, which could lead a letter of reference for a more exciting job, and Mr. Lewis agreed to employ Grace for six months.  He doesn’t really need her and tells her she can just hang out in the back room instead of actually working.  Grace soon becomes bored with doing nothing at work, and to kill time begins to clean up the shop and organize the books.  She sets up appealing displays to attract customers, and rejuvenates the place, without much positive feedback from Mr. Lewis.

A kind and handsome longtime customer of the bookstore, befriends Grace and encourages her to read.  Encouraged by the attractive fellow, who brings in one of his favorite books for her, Grace begins a journey into literature, that changes her life.

When Britain does declare war on Germany an eight month long period called the “bore war” or the “Phoney War” begins.  All sorts of preparations for war begin; blackouts at night, everyone carrying a gas mask, bomb shelters are built in back yards, rationing of food, but no actual attacks occur.  Nevertheless, Grace who wants to do her part, joins the ARP (Air Raid Precaution Unit) and works with a rather gruff man patrolling the dark streets several nights a week.

When Germany does finally attack London and the air raid sirens go off, everyone just thinks it is another dril, and they are caught unaware as bombs begin to drop.  Soon the bombardments become a terrifying and unrelenting daily and nightly reign of terror, causing citizens to sleep in bomb shelters, as their homes and neighborhoods are blasted apart and fire bombed.   Grace’s nightly ARP patrols immerses her into the horrors of bombardment while during the day she becomes more and more involved in keeping the book shop afloat.

The constant bombardment not only changes the face of London, but also the changes the direction of all the lives who live there, including shy Grace. This is a heartwarming tale about people working together and helping each other during years of hardship and sacrifice.  It was thoroughly enjoyable and historically interesting.