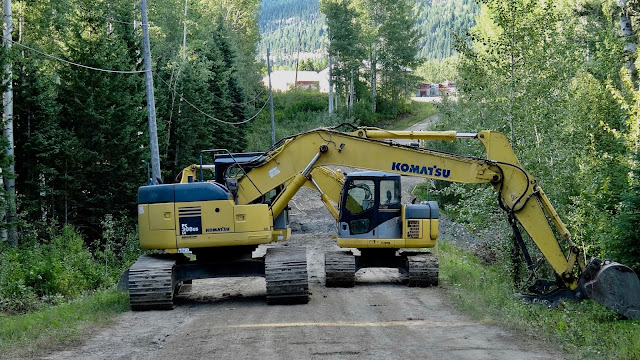 For more than a week we have been trying to take our dog walks at the McBride Airfield, but have been unable to because Airport Road is closed.  We couldn’t figure out what was going on, but there seemed to be a lot of big dump trucks hauling loads of gravel and a sign telling us that the road was closed.

Friday evening we thought that we would try again, thinking that probably the trucks wouldn’t be running and the crews not working, but when we arrived the closed sign was still there.  No one was around and our curiosity got the best of us so we parked and walked down the road to see what had been going on.

After our observations, we still didn’t really know what they were doing down there.  We had never recognized there was a problem at the bottom of the slope, but who knows.  I found it interesting that we could see a fire truck parked up by airfield.  I guess they had to do that for safely reasons, although there is very little air traffic that use the field and there are no personnel at the airfield to man the fire truck if something did happen.

It seemed strange to see all of the work on Airport Road, when we never noticed any problems there, while the road to the high school has been closed at Dominion Creek for months and months.

We were left with more questions than answers, but at least we had a little outing. 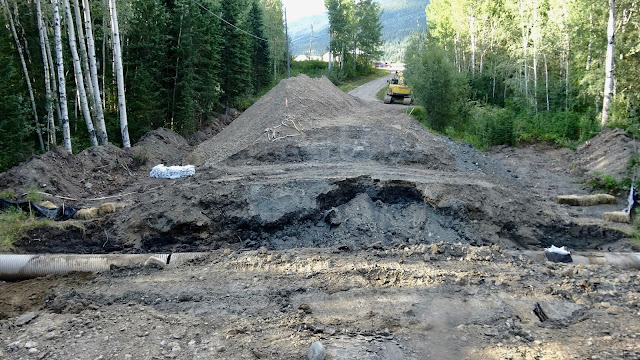 You can see my paintings at:  davidmarchant2.ca
Posted by Life in BC's Robson Valley at 09:39