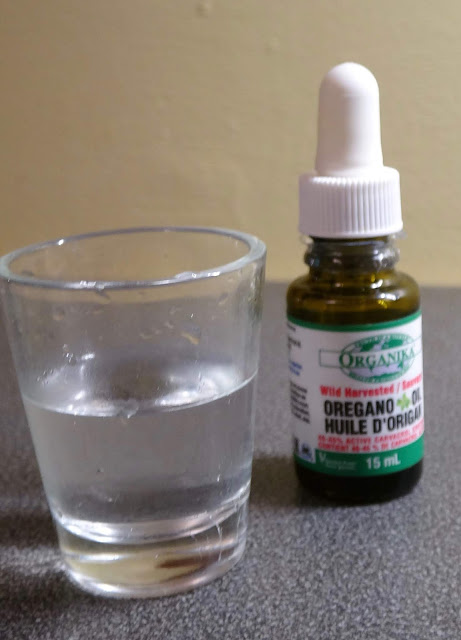 I’m always pretty skeptical about a lot of the “natural” “miracle” organic supplements found in health food stores, but I have really changed my opinion about one of them--Oregano Oil, after my wife talked me into trying it.
I have three “problem” teeth that my periodontist is trying to save.  The gums around those teeth have  receded quite a bit and they are a bit loose.
About six months ago one of those problem teeth, a back molar, started to become really sensitive to temperature.  Eating became a painful experience for me because of its sensitivity. I was extremely miserable and was seriously thinking of having the tooth pulled.  Not only that, but I developed what I thought was a really bad cold, with my sinuses running and stopped up.  I felt pretty miserable.
At least I thought I had a cold.   Now I wonder if I had some kind of infection around the molar and that somehow spread into my sinuses.   That is when it was suggested me to that I try some Oregano Oil.  I put five drops into a shot glass of water and gulped the foul tasting stuff down three times a day.
I was amazed at what happened.  Both my tooth sensitivity and “cold” quickly disappeared within a couple of days.
Just last week, I started having trouble with my teeth again.  One of my front teeth, which is capped, started getting loose after eating corn on the cob,  then it seemed that some of my top molars started touching in a different way, when I closed my mouth.  It was like they had been pushed downward a bit.
Again, I thought that I was going to have to get my front tooth pulled, then I thought of the Oregano Oil and started taking it.  In a day both problems cleared up.  I am really impressed with the stuff.
Oregano Oil is supposed to be antiviral, antibacterial, antifungal, and antiparasitical.  I keep thinking that my problem with my teeth was a low level infection, but whatever it was Oregano Oil sure cleared it up.
I don’t know how many people have the same problem I had, but if you do, you sure should give Oregano Oil a try.