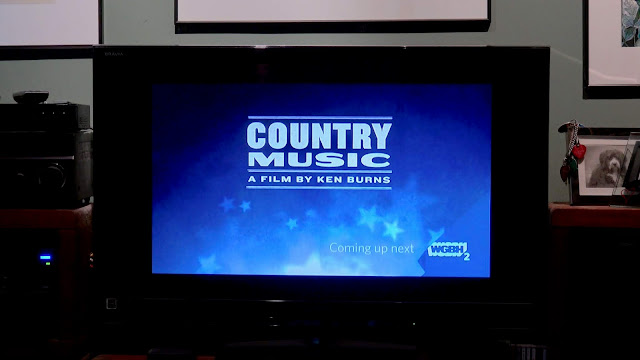 I have always loved the documentary films made by Ken Burns and shown on PBS stations.  I have always loved music and  I have always loved history, so when I heard that Ken Burns was making a documentary about country music, I was excited to see it.  That series has now aired on PBS stations and I was certainly not disappointed in the film.
Like his other documentaries (The Civil War, Baseball, The West, Jazz, World War II, etc), it was full of unusual photos and film clips, wonderful human stories, and great music.  “Country Music” went back and traced the roots of the music, Irish folk tunes, and black blues, then showed how individuals borrowed, mixed, and innovated it into the various branches now incorporated into the genre (Bluegrass, Honky Tonk, Western Swing, Folk, etc) .  It was all enlightening and entertaining.
I was surprised at how many of the tunes we that we play at our Tuesday Night Jam ended up as background music in the film.  “Country Music” certainly gave me a greater understanding of the music writers and performers that gave us those songs.   Unfortunately, a lot of our jam musicians don’t have access to PBS, so I ordered the DVD of the series and will give it to the McBride Library so they can watch it.
It is a bit of a bummer to be telling you about the series now that it is over.  I guess those of you in the US can stream it with a PBS Passport app, but Canadians are just out of luck because because of copyright restrictions.