Paying For Our Mild Winter Start 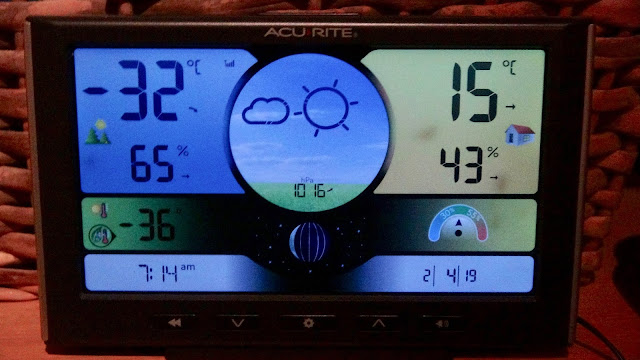 Brrrr, winter’s nastiness has hit the Robson Valley.  All of the smugness we were experiencing at having really mild winter temperatures have disappeared with the blast of arctic air that has fallen over us.  This morning when we ripped ourselves out of a warm bed, the outside temperature was -32C (-25F), and the inside temperature was 15C (59F) so I had to quickly stir up the glowing coals in the wood stove to get producing heat again.
Today’s forecasted “High” temperature is supposed to be -20C (-4F), normal high for the day is supposed to be -3C (26F) with the normal low at -13C (8F).
All of these temperatures are actual, not the “Wind Chill” temperatures, which seem to have taken over the media to make things sound more dramatic.
While it’s cold enough now, when we first moved to McBride we used to get -40 (the same in both C. and F) every winter.  Its been decades since we have gotten that cold.  When it did get that cold, it seemed that everything seemed to break or go wrong.  The car wouldn’t start, our water would freeze, at work (when I was working in a mill), the machines broke and we were told to go home.
Those times are still so deeply ingrained in my memory that even today when we get a cold spell like this, I feel very apprehensive and uneasy.


Check out my paintings:  davidmarchant.ca
Posted by Life in BC's Robson Valley at 09:52