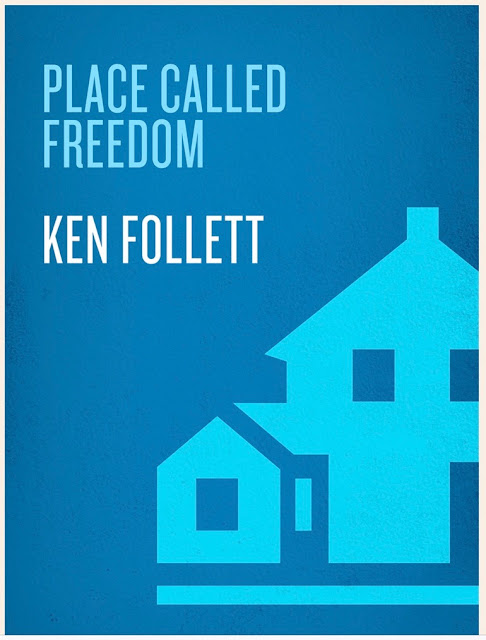 Our cold weather has had me doing a lot of reading.  Follett’s Place Called Freedom was an enjoyable escape during all of those hours spent in the house.  I read it as an ebook and the book was a lot better than it’s boring cover that you see above.  Here is my review:

Mack McAsh, was a young coal miner who dreamed of living free.  In Scotland during the 1700’s, the sons of coal miners became at birth, subjects of the mine owner, and if they worked in the mine a year and a day after their twenty-first birthday, they could never leave to do anything else. This seemed unfair to Mack, whose mother had taught him to read and write, and prompted him to write a letter to a progressive lawyer in London.
The reply he got confirmed that the practice was against the law and Mack went public; reading the letter out in church, which forever turned the wealthy mine owners against him.  The two sons of the owner both had their eyes on, and sought to wed the lovely Lizzie, the curious and rebellious daughter of a poor, but land owning widow.
When Lizzie confronted Mac after church about upsetting the church service, he rebuked her by saying she didn’t know what she was talking about, because she had never been down in a mine to see the horrible and deadly working conditions.  This accusation led her to dress like a man and get one of the owner’s sons to take her down into a mine.
She was naturally appalled at the horrid and dangerous working conditions, and just her luck, there was a mine explosion when she was down there.  Mack, though injured, ended up saving her and some other miners in the disaster. This led Lizzie to change her opinion of Mack, who had just completed his year in the mine, had to leave or be forever a mine slave, so he told the owner’s son he was quitting.
He managed to escape after being tortured by the owners who were trying to prevent his departure. Mack eventually made his way to the chaotic streets of London, where he struggled to make money.   However, his life was to be forever destined to be entwined with both the powerful and mean mine owners, and the lovely and spirited Lizzie.  He ends up being framed for a crime by the mine owner’s son, and transported as a convict-slave to South Carolina.
There he again struggles to free himself from the grip of the powerful mining family (and into the arms of the rebellious Lizzie who has married one of the mining family sons).  It is they who have become his masters, as plantation owners.
A Place Called Freedom is an adventure story, with lots of action. The narrative moves quickly and was nice escape on a winter’s day.

View my paintings at:  davidmarchant.ca