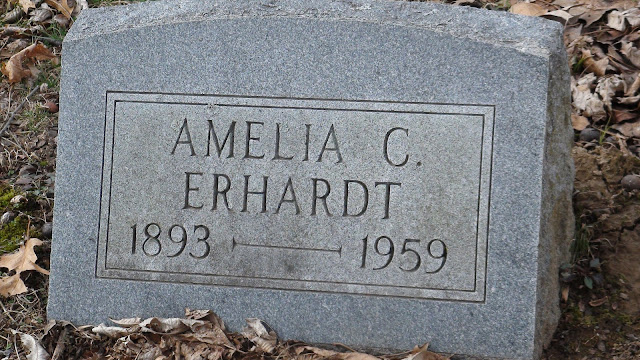 I recently blogged about the summer job I had mowing Evansville’s Oak Ridge Cemetery, while in elementary school.  As I pushed the lawn mower around the cemetery, I would entertain myself by reading the tombstones and thinking about what the people buried there were like.  One of the most thought provoking graves stones was that of Amelia C. Erhardt.  I didn’t know anything about her, but when my young brain first became aware of Amelia Earhart, the famous female aviator who mysteriously disappeared in the Pacific, I immediately flashed back to that tombstone I used to mow around, and wondered if I had solved the mystery.  The next time I mowed I discovered the difference in the spelling of the two names.
Of course they were two different people, but the way their names were pronounced was the same, and they were contemporaries.  The aviator was born just 4 years later the one buried in the cemetery.  I wonder what is was like for the “cemetery Amelia” when all the publicity about the aviators exploded on the media.  I suspect a lot of her friends and acquaintances made jokes to her.
All the time I was growing up I assumed I was the only person in the world with my name since  “Marchant” is not a real common name.  I didn’t even know of anyone else with that last name except for my grandparents.  All through my schooling and university, I never ran into anyone with the last name.  Of course the internet changed that and I now know there are lots of David Marchants out there.  I was further surprised when 20 or so years ago, a woman whose last name was Marchant moved to our Village of McBride.  What are the chances of that happening in an isolated little place with just 600 people.