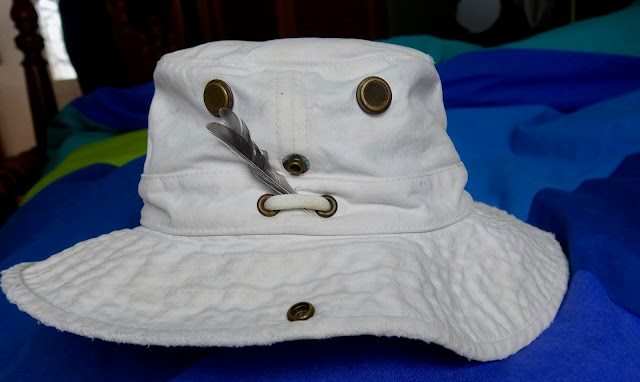 Every since I first heard the American Revolutionary War song “Yankee Doodle Dandy”  as young child, I was confused about the lyrics.
Stuck a feather in his hat and called it ‘Macaroni’”---Macaroni?  that made no sense to me at all.
No matter how I tried, I just couldn’t make the connection in my mind, between a feather in the hat and pasta.  I lived with that bewilderment for 65 years.
Well, the other day I read something that finally made those “Yankee Doodle Dandy” lyrics make sense.  I was reading a book called “The Measure of a Man”.  It was a book I really wasn’t very excited about, because it dealt with a lot of things that didn’t really interest me, ie dress suits, tailoring, fashion, etc., but I was reading it for our book club at the library, so a persisted.
Anyway, the book presented a lot of the history of clothes making, and it seems that back in the 1700’s when young men in England were sent to Europe for a “Grand Tour” as part of their education,  the young men who came back from Italy raved about eating macaroni and even formed a club called the Macaroni Club.  Members of the club of were often dandies, “dressed to the nines” in high fashion, with tall powdered wigs.  They were often referred to as “Macaronis”.
When the British soldiers were sent to the Americas to fight the revolutionaries, they sang this song which poked fun at the Americans, who they saw as so dumb that they thought that sticking a feather in their hats made them think they were Macaronis.  The Americans didn’t really get the joke and made the song popular among themselves.
There you go, if you too wondered about the song’s lyrics, at least now you have an explanation.


You can see my photo-realistic paintings at:  davidmarchant.ca
Posted by Life in BC's Robson Valley at 11:08