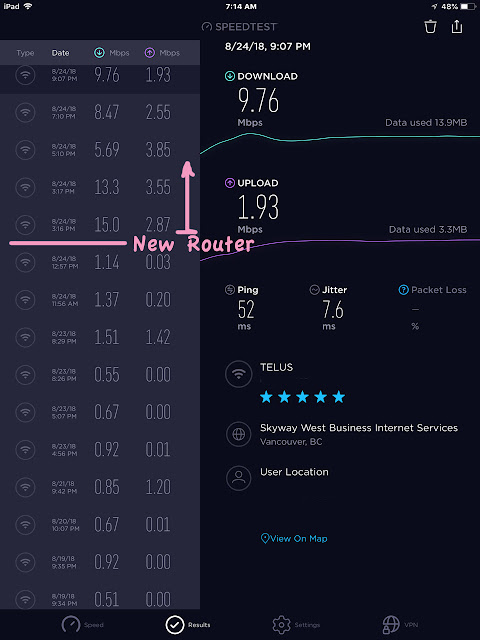 Joan and I have been going through a real period of funk lately, watching the failing health of Skye, daily seeing and breathing the thick smoke that blankets the Valley, and trying to get some use out of our internet service with speeds that were often so slow, they were unusable.  It was hard to generate any kind of hope for any of these problems; Skye is now dead, the smoke remains, but yesterday, at least, we got some relief with our internet situation.
I ranted about our internet problems before, ( http://www.davidmarchant.ca/Color_&_Light/Blog/Entries/2018/7/27_Return_to_Sender.html) and there seemed to be no solution.  Out of frustration I fired off some emails to our Federal representative, our Provincial representative, our Regional District Representative, and the Village Planner in McBride.  It was more of a venting exercise rather than one where I thought I would get some kind of positive result, but I was wrong.
Shirley Bond, our Provincial Member of the Legislature, emailed me back, said she was impressed by my email and asked if she could use it to pursue the problem.  I signed a release, and wondered if anything would happen-- and something did.  She contacted Telus, our local phone company, and after a couple of weeks, I was contacted by one of their representatives.
I was told that she too was struck by my email, didn’t feel I was treated properly, and she wanted to try to help me.  She said although she could not supply me with the Smart Hub I was looking for, she did have one different Smart Hub that Telus was experimenting with, and asked I if I would be willing to try that as a “Beta” experiment to see how it would work.
I jumped at the chance, figuring just about anything would work better than the service I had, and yesterday a technician came to the house and set it up.  The internet speeds it gave us were between 6 and 15 times faster than I had been getting with my previous service.  (The photo shows my speeds, below the pink line are the previous speeds, and above the line are speeds with our new router.)
Its hard to express how happy this has made us.  It opens up all kind of things we can do on the internet that we previously had not been able to do.
It sure feels good to have some kind of positive thing happen to help lift our spirits a bit.