My First Summer in the Sierra by John Muir 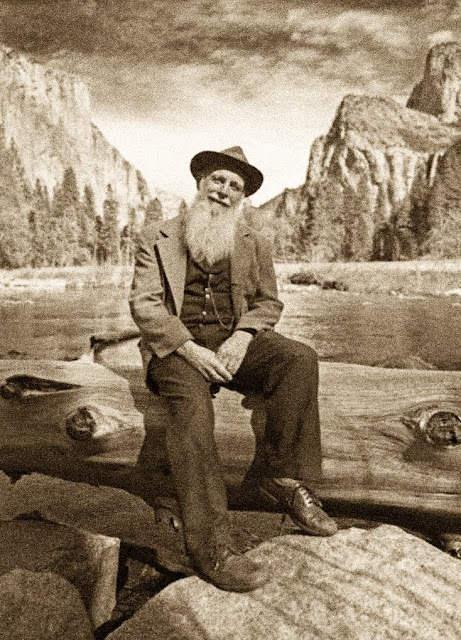 Our theme for last month’s McBride Library Book Club was “A book with the word ‘Summer’ in it’s title.  This was a tough theme for me because I had a hard time finding a theme book that I wanted to read.  Finally however, I came upon this John Muir book and and knowing that he was one of the early environmental pioneers, I  downloaded it (it was free from iBooks) and began reading it.
Here is my review:

In 1869, at the age of 31, John Muir had an opportunity to spend a summer in the Sierra Mountains, watching over a flock of sheep and their herder.  He was extremely interested in all of the natural world to be found in the spectacular mountain environment of what was to later become Yosemite National Park, and so this was a dream job for him.
Since his only responsibility to the sheep’s owner was to keep an eye on the hired shepherd and the operation, he had ample time to explore the natural mountain landscape, sketch, and keep a diary.  This book is basically the diary he kept.  He writes like a poet, full of awe at this mountain wonderland he finds himself in. He describes all he sees, all the plants and wildlife he runs into, giving the reader their description and scientific name.
Having only the scientific name meant I had often go to the internet to see what plant he was talking about. That wasn’t too onerous because I read the book on my iPad so all I had to do was to click on the name and then click on “Look Up” and it took me to a photo of the plant.
I, like John Muir, am very interested in the natural environment and probably pay more attention to the natural things around me than most people, but I don’t even come close to the detailed observations that Muir makes, everything from species of ants, the kinds of rocks, to the types of clouds building above the mountains.
By July 4, most of the “grub” that was meant to feed the shepherd and John was gone and all they had to live on was mutton, sugar, and tea, until the herd’s owner came to resupply them.  This diet caused stomach problems, but with disgust, Muir forced it down.  He missed bread tremendously.  The severely restricted diet subdued Muir’s astonishment with the environment until they were resupplied with food once again, then John Muir’s descriptions of the mountains and plants once again began to flourish.
In one entry,   Muir tells of hiking up to the top edge of Yosemite Falls, to carefully peer over the 2,400 foot drop.  Although Muir said he wasn’t afraid peering over the edge, that night he had a very restless sleep as a result, with frightening dreams which kept waking him with a start.
I enjoyed reading Muir’s description of the shepherds pants.  Every day for his lunch, the shepherd hung a cloth bag of cooked mutton on his belt, and the fat and gravy from the meat slowly dripped onto his pants as he worked and sat around.  This created a slimy film on his pants which picked up everything from small twigs, leaves, insect parts, mica and everything else they came into contact with.  The shepherd worked all day and slept in the pants at night, never changing or cleaning them.  Muir writes that instead of getting thinner with time, the pants just got thicker and thicker.
I enjoyed not only Muir’s description of his time with the herd of sheep up in the Sierras, but also just the things he mentions about what life was like in 1869, like running into a small band of Indians living rough.