The Paris Wife by Paula McLean 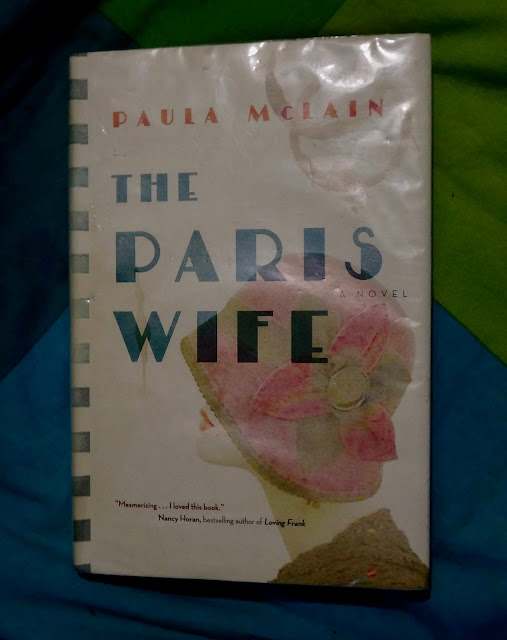 This novel written in the first person tells the story of Hadley Richardson, Ernest Hemingway’s first wife.  It reads like an autobiography.  Most of the feelings it reveals about their marriage are not uncommon, except for the fact that her husband was the struggling writer, Ernest Hemingway, and that fact created some unique situations and interesting locations to the story.
They meet at a party in Chicago, where 29 year old Hadley had gone to visit a friend and to forget, after the death of her sick mother.  There was an immediate attraction between Hadley upon meeting the 21 year old Hemingway, which continued weeks later in letters, after Hadley returned to her home in St. Louis.
Hadley soon returns to Chicago and marries Ernest. Ernest works for a small newspaper and they have very little money, just getting by, but when Hadley gets $6,000 from her uncle’s will, they decide to move to Paris, where they can be a part of the artist community and Ernest can try his hand at writing.
They find Montparnasse, the artist area, too expensive and so rent an apartment in a poorer section of Paris.  Ernest rents an additional tiny space where he writes daily, which leaves Hadley on her own.  In Paris they meet Picasso, become friends with Ezra Pound the poet and Gertrude Stein, F. Scott Fitzgerald the writers.   Ernest writes, but doesn’t sell.
When he accepts a short term job as a war correspondent in Istanbul, an argument occurs because Hadley doesn’t want to be left alone.  This is the first crack in their marriage.  Another occurs when Hadley travels to visit Ernest while he was on another job in Switzerland and she loses all of his writing manuscripts on the train.
Then Hadley discovers she is pregnant, something which they had carefully tried to avoid.  Ernest then feels pressure for finding steady income which perhaps might kill his dreams of becoming a writer.  There is plenty of love in the relationship, but things are not sailing as smoothly as they did.
Luckily selling a short story brightens the couple’s optimism and an offer of a book of Hemingway’s written sketches strengthens the relationship.  They move back to Toronto for the baby’s birth and to spend a year before returning to Paris.  The baby boy was successfully delivered, but the move didn’t turn out to be a good one for Hemingway, because he was saddled with an intolerable reporting job at the Toronto Star.
They couldn’t last the year in Toronto and rushed back to Paris, where they try to reconnect with their previous lives.  Hemingway sells some more stories and a first novel, but Hadley is not happy being back in Paris, and Ernest begins to hang around another woman, which increases Hadley’s unhappiness.
After they attend the bull fights in Pamplona, Hemingway writes another novel using the conversations of friends present and incidents that happened there, and in reading the manuscript, Hadley discovers she is nowhere in the story.  You start to get a sense of where their marriage is headed.
I found this story of their marriage convincing and interesting, but I didn’t gain any new respect for Hemingway.  It was not written to denigrate him, it was written in a matter of fact style, but Hemingway just had a lot of characteristics I  never did like, and they were re-confirmed in the novel.


Visit davidmarchant.ca to see my paintings.
Posted by Life in BC's Robson Valley at 09:48