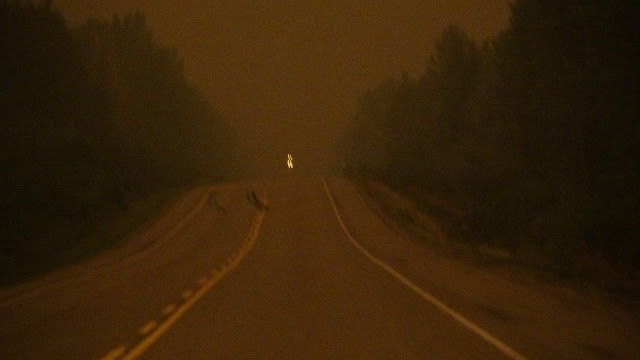 I had an extraordinary experience yesterday.  When I woke up the smoke around our house was a little worse than it had been; the sky was a slight an orangish grey, the mountains had disappeared, but I could still see the trees at the far end of the pond.  I had a dental appointment in Prince George and I started off on my two hour and a half hour drive at 7:30.
Smoke obscured the scenery the whole way, but about 9:30 in the morning, as I was nearing Prince George I noticed that the daylight was slowly starting to disappear.  The sky began to take a more orangish hue and became darker and darker.  I was shocked when the GPS unit in my car suddenly switched to “Night Mode” and the dashboard did too.
The further I drove the darker it became.  I was gobsmacked.  I kept shaking my head in disbelief.  What was happening?  What was I heading into?  I had never experienced such an eerie experience.  When I got to the first traffic light, up by the airport turnoff, it was totally like night driving.  All of the streetlights were on.  It seemed unreal to me that it was just 10:00 in the morning.
I dreaded entering the bowl in which Prince George sits, because it is generally more polluted than the surrounding area, but yesterday, as I descended, it got a bit lighter, and I began to see more and more light in the sky.  By the time I got to the dentist’s office, the sky was getting back to what has been normal for the last two weeks:  a very smoky haze that obscures everything in the distance, but the sky was lighter with a slight orangish hue.
I was still a bit shaken from what I had driven through, and had a great urge to tell everyone I talked too, but everyone had experience the same thing, which had been caused by extremely thick smoke (thick enough to block out daylight) from the hundreds of forest fires which are burning throughout BC.  The smoke from all of those those fires has now traveled across Canada.  (See satellite photo at the bottom.) 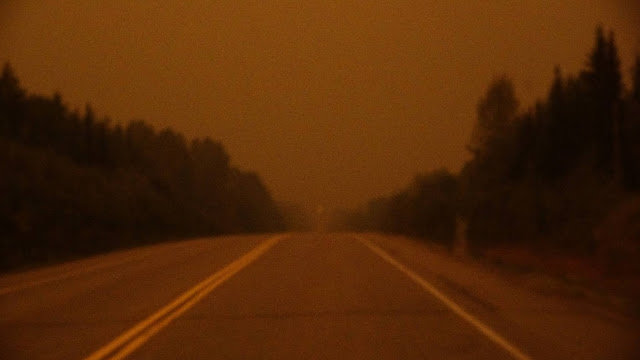 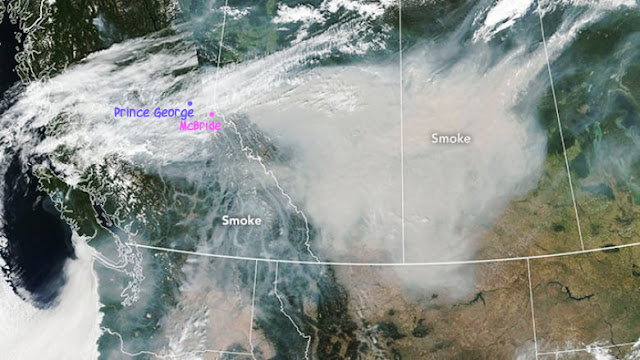 You can see my paintings: davidmarchant.ca