The Girl on the Train: The Novel & Film 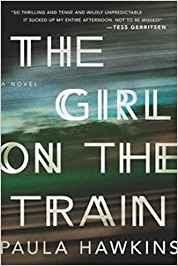 January’s theme for the McBride Library Book Club was to read a book and watch the movie of the same book.  It is a theme we do every year and I always discover the same thing--the books are always so much better than the videos.  My choice was:  Girl  on the Train by  Paula Hawkins
This is not the usual kind of novel I pick out to read, but I was interested in reading it because on a review I heard it compared to “Gone Girl” which I really enjoyed reading.
This psychological who-done-it begins with a woman named Rachel traveling on a commuter train to work. Rachel’s life is slowly disintegrating.  Two years after her divorce, she has let herself go, living in the small sparse bedroom of an old school acquaintance, her work means nothing, and she is becoming an alcoholic.
Her only joy seems to be looking out of the window of the commuter train on her way back and forth from work, she is intrigued by the occupants of one particular house beside the railway, where her railcar makes a daily stop for a signal. She fantasizes about the happy lives of the couple that she sees there, imagining their loving relationship.  She tries to avoid looking at the nearby house where she and Tom, her ex-husband used to live.  He continues to live there with Anna, his new wife and their baby girl.
The novel, which is written in the first person, alternates it’s chapters between the lives of Rachel, Meghan, and Anna.  Meghan is the woman in the happy imagined relationship, that Rachel watches from the train. The things in Meghan’s chapters occurred a year before those in Rachel’s and Anna’s chapters, which happen in real time.
Although Rachel fantasies about Meghan’s idyllic marriage from the train window, Meghan, like Rachel, is a very unhappy woman. She feels her marriage has trapped her in an unfulfilling and boring life. She had previously owned an art gallery and longs to be back in the city instead of being stuck at home in what she perceives as a dead end existence.  She is unhappy, restless, and can’t sleep.  On Tom’s suggestion, she starts seeing a therapist, with whom she begins to have an affair.
Rachel’s drinking continues to cause her life to spiral downward.  One morning when the train stops in front of the happy couple’s house, she is shocked to see Meghan, in the yard hugging and kissing another man.  Seeing this unfaithfulness, triggers memories of her catching Tom in his affair with Anna.
On a weekend after drinking heavily, she decides she is going to take the train to see the husband of her “happy” couple to warn him of his wife’s cheating, but after getting off the train, something happens to her and she wakes up the next morning unable to recall the night before, but she is battered and bruised.   Her blackout about what happened the previous night plagues Rachel, and this is intensified upon reading in the newspaper that Meghan has been reported missing to the police.  Rachel  is questioned by the police after being seen in a drunken state in the vicinity by Anna.
When Meghan’s body is found in a shallow grave in a nearby park, the book becomes a real mystery novel, full of many psychological flawed characters, all of which could are viable suspects to the murder. There is a lot of exciting reading to be had with, “gaslighting”, drama, tension, and plot twists in this well planned and well paced novel.

The Film:
Like I said, for me the movies just aren’t as good.  One member of our book Club started out watching the movie first, and shut it off because it was so unappealing to him.  When he started reading the book he was immediately sucked in to what was going on.
One of the obvious differences between the book and video was the location.  In the book the story is set in a suburb just outside of London while the film sets it outside of New York City.  I noticed this immediately in the video because the houses Rachel was watching were large New England style dwellings in a sprawling suburb with larger lawns than the smaller, identically designed smaller houses of the book. The houses in the film seem set back too far from the tracks which made watching the couple from the train window less plausible.
In the video Rachel was always sketching in a notebook, while in the novel she made notes to herself.
When you read, you create images of the characters in your head. I guess it’s not surprising that the actors in the film didn’t match what I had envisioned and I didn’t really feel the same attachment to the characters, as I did in the novel.   Also there was much more character development in the book and I felt more sympathy for the female characters.
The film had more sex, except that in the book there was a sexual relationship between her therapist and Meghan while in the film the therapist held to his professional code of ethics and didn’t really submit to Meghan’s advances.
Of course because it was a mystery you get more impact from the ending in whatever you read or view first, so in my case the video couldn’t compete surprises in the book, because I already knew what happened.