Geraniums on the Roof 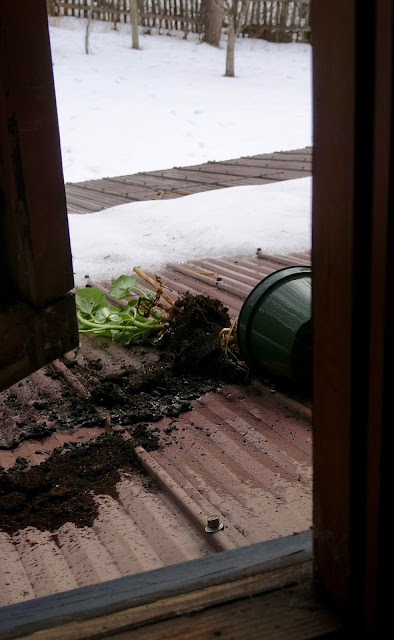 On the January 13th blog I wrote about the geraniums sitting on the window sill.  Yesterday a couple of those geraniums had an unexpected adventure.  It all started because it was so mild and windy.
Even though it was very mild outside (+5C, 41F) and it was comfortable enough in the house, I decided to put another log on the fire just to keep the fire going.  I hadn’t considered how fiercely the wind was howling outside.  The fire was smoldering in the stove, and periodically downdrafts in the chimney, forced smoke to stream from the stove into the living room and spread throughout the house.
Since it was so mild outside, I decided to open one of the upstairs windows in an attempt to clear some of the smoke out of the house.  I figured the two geranium plants sitting on the window sill would be okay because the temperature outside was above freezing.  The plants leaves were blown around a bit from the wind gusts, but that was okay.
A few hours later when I went upstairs to feed the cat, I noticed that there were no geraniums on the windowsill where the two had been sitting.  I spotted one dumped over on the carpet.  Where did the other one go?
I glanced out of the window and there it was, pot turned over, dirt spread around and the poor plant sprawling on the metal roof.  I found it very strange that one geranium blew into the house and the other blew outside onto the roof.  It must have been some pretty powerful variable wind gusts to cause that to happen.
Now that I am thinking about it, I am wondering if Lucifer, our cat had anything to do with any of this.  She’s pretty curious and sticks her nose in a lot of places where she shouldn’t.  I have no proof so I will have to assume it was just a very strong wind.
I set forth to rescue the geranium, so I climbed up onto the roof.  I couldn’t gather all the dirt from the roof so I had to go out to the tool shed and get some additional potting soil.
The big bale of potting soil was frozen so I used a post hole digger to loosen some up.  I filled the pot, and replanted the geranium.
Meanwhile, the wind continued to howl and no matter what I tried, smoke periodically blew into the house from the wood stove.  By this point I was pretty pissed off with the whole ordeal, so I got the ash can, pulled the two pieces of burning firewood from the stove put them in the can, carried them outside, and threw them into the snow to snuff them out.
It took a while for the smoke to finally clear the house, even with two doors opened.  Fortunately, it was warm enough that the electric baseboard heaters provided enough heat to keep the house comfortable overnight. 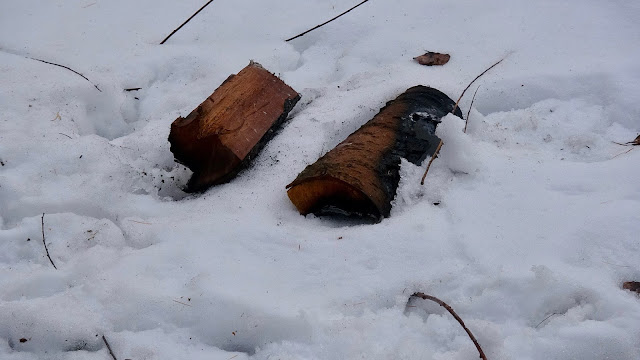