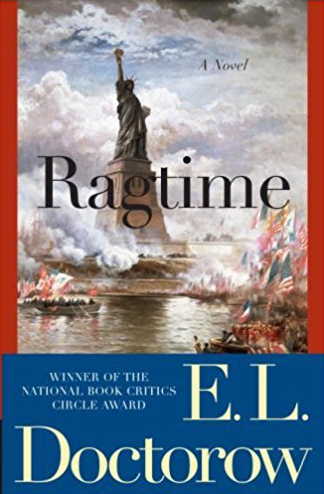 I couldn’t find anything I wanted to read with the word “time’ in it so I fudged the theme a bit and read the novel Ragtime  by  E. L.  Doctorow, because it was something I had been wanting to read anyway.
It is about America at the beginning of the Twentieth Century, with its social movements, it’s newsmakers, and its prejudices. The central storyline concerns a wealthy family, whose members are not specifically named. They include Father, Mother, Younger Brother (Mother’s brother), Boy, and Grandfather.
Younger Brother has become fascinated with the newspaper photos of the wife of an jailed wealthy spoiled good-for-nothing, who jealously murdered a famous architect because he was his wife’s only friend. Younger Brother is so infatuated with the woman that he goes to New York City determined to meet her.
Father, whose hobby is adventure, leaves for the North Pole on an expedition with Commodore Perry, leaving Mother and Boy alone in the big house, since Younger Brother, who normally also lives there is off chasing after the wife of the incarcerated rich guy.
While walking in the garden Mother hears a sound, digs in the ground and finds a newborn Negro baby, still alive. Authorities soon find the mother of the child, a washerwoman who works in the neighborhood.  Instead of allowing the washerwoman to be incarcerated, Mother  assumes responsibility for her and the infant and allows them to live in the attic of their near-empty house.
Upon returning from the North Pole, Father finds his domestic situation has changed, with a now more independent wife, a Black washerwoman and her infant living in the attic.  He feels out of the loop in a household that seems content to run along without him.
After some months, a very polite, well-spoken, dignified Negro ragtime piano player named Coalhouse, who is wealthy enough to own a car, begins visiting the house hoping to see the washerwoman and baby. He visits with the family every week, but at first the washerwoman refuses to see him. Eventually she does and they become engaged to be married.
On one of Coalhouse’s drive back from his weekly visits, his way is blocked by a group of redneck volunteer firemen who tell him he can’t drive on the road until he pays a $25 toll. He refuses and leaves his car to seek a policeman.  Upon returning to his car he finds it vandalized with human excrement put on the back seat.  He leaves his car parked where it was.  This incident spawns a series of unfortunate actions that quickly escalate into violence.
Over the next few weeks Coalhouse tries to get legal help for the vandalism, but being a Negro, he can find no legal or governmental help. His car meanwhile becomes more and more vandalized and what is left of it is dumped in a pond.  Coalhouse refuses to ignore this racial injustice and tells Sarah the washerwoman he cannot marry her until the injustice is recognized and he gets his car back, fully renewed.
When the distraught Sarah hears that the US Vice President is coming to town for a speech, she sneaks off to petition him for help. As she rushes toward him, a Secret Service man hits her in the chest with his rifle butt, and she dies in the hospital, leaving the white family devastated and in charge of her baby.
Shortly after her death the volunteer fire station explodes, killing several firefighters, and a note is delivered to the local papers stating that unless Coalhouse’s car is returned in new condition and the fire chief turned over to him, more firemen, firehouses, and the whole city will be destroyed. There are plenty more events to come, but I will end my telling of the story there.
This central story of the family is interwoven with side stories of incidents, and famous people of the period.  Those famous people making an appearance in the novel include Houdini, the anarchist Emma Goldman, J.P. Morgan, Commodore Perry, Zapata (the Mexican Revolutionary), Booker T. Washington, and Henry Ford.
The novel does an extraordinary job of easily immersing the reader into the attitudes, beliefs, and atmosphere of the early 1900’a in America.  I found it amazing how the story wove all the characters, both famous and fictional together and connected them up so nicely. It  was a very entertaining novel to read.