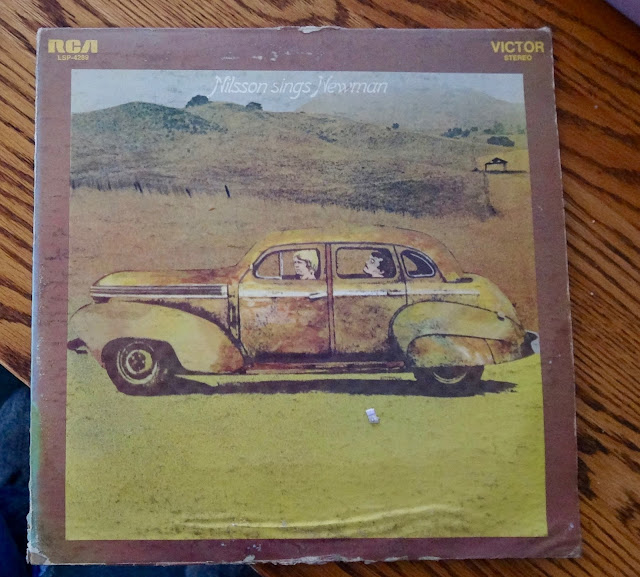 Even though I no longer have a turntable, I was looking through my record album collection this morning, and came across one of my all time favorite albums--Nilsson Sings Newman by Harry Nilsson.  For me, the songs on this album are sort of the musical version of a “comfort food”.  The songs are very melodic and easy to listen too.   It also has some good memories attached to it.
In the early 1970’s I was a conscientious objector assigned to work in the Indianapolis Goodwill Store for two years.  It was a memorable couple of years where I met some very interesting characters, that I would have normally never run into.
One of the pleasures of each working day was the lunch hour, when employees could wonder around in the warehouse looking through the donations that came in.  The range of interesting items that were there was huge.  Employees were allowed to purchase things they found, and even though my salary was extremely low, I couldn’t resist buying some of the amazing things I found.  Perhaps my most treasured find was an old acoustic Gretch guitar (Burl Ive model) that I still have.
Anyway one day when I was perusing the merchandise, I came across the Nilsson Sings Newman album amongst the other old vinyl in the record section.  Surprisingly, unlike the other records, it still had the plastic wrap and had never been opened.  Where did it come from, why was it donated?
At the time I followed music religiously.  I loved Randy Newman from the first time I heard him, and I really liked Nilsson’s singing from the songs I heard on the radio, but I had never heard about him making an album of Randy Newman songs.  I was familiar with most of the songs listed on the back of the album, having heard Newman’s version of them, but I grabbed the album anyway, carried it to the employee purchase desk and took it home so I could listened to it.
I normally prefer songwriters singing their own songs more than other people doing covers of them, but this album is one of the exceptions (another one is Famous Blue Raincoat in which Jennifer Warnes does Leonard Cohen songs).  Nilsson has such a great voice and the arrangements are very similar to Newman’s.  Many of the songs are reminisces of the past with a nice sadness to them, and I think they hit the same chords that comfort food does.

You can view my paintings:  davidmarchant.ca
Posted by Life in BC's Robson Valley at 10:54