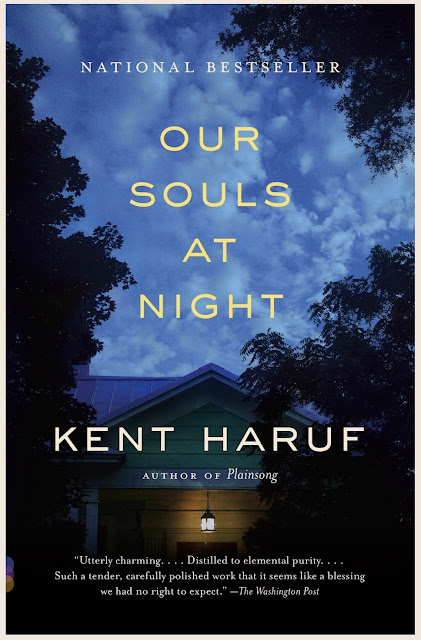 The other day at our McBride Library Book Club, members were mentioning authors that they really enjoyed reading.  Naturally, I had to put in my two cents worth and said that one of my favorites was Kent Haruf (rhymes with “sheriff”).  The moderator then mentioned that he had died a couple of years back, and suddenly I felt cheated, in learning that my recently discovered favorite author would no longer be out there writing novels.
Back home I got on my computer to get more information and discovered that he died in December, 2014.  I also learned that he, like myself, was a conscientious objector during the Vietnam war.  Another interesting fact was that when he wrote he took off his glasses and covered his eyes with a stocking cap so he could only visualize things in his mind, while he typed the first draft of his novels out on a typewriter.
I have read three of his novels so far.  The first one I read was “Plainsong” which I reviewed in September
(http://www.davidmarchant.ca/Color_&_Light/Blog/Entries/2016/9/29_Plainsong.html)
I have just finished two of his other ones.  My review of those are below:

The Tie That Binds by Kent Haruf
I was a big fan of Haruf's Plainsong and wanted to read some more works of the author.   The Tie That Binds is a story located in Holt, the same small isolated town in the plains of Colorado, and has one of the same characters in a minor role.  At the beginning of the novel we learn that an eighty-something year old woman is in the hospital and is going to be charged with murder.
The storyline consists of a neighbor of this woman giving the reader a history of the woman's life in a compassionate and realistic way, like a concerned person might tell a story to a friend.  The woman's life demonstrates the smothering and trapped life one can experience on an isolated farm with a cruel and dominating father.
It is a powerful and well written novel, realistic and honest, that shows both the cruelty and humanity of life on the rural plains of Colorado.

Our Souls at Night by Kent Haruf
This is another touching novel by Haruf that takes place in the prairie town of Holt, Colorado.  Lewis, a retired widower is surprised one afternoon to be visited by Addie, a 70 year old widow who lives on the next block. He is further surprised when he hears what she has to say. She tells him she is lonely at night and misses not  having someone to talk to in bed.  She then asks Lewis if he might consider coming over and spending the nights with her.
Lewis is totally taken aback, and after some thought, a couple of night's later he accepts Addie's invitation and joins her.  After some awkward initial moments, they settle in to a nightly plutonic relationship and both of them no longer feel alone and enjoy each other's company.
Of course, this causes a lot of raised eyebrows and gossip among their acquaintances.  When Addie's son separates from his wife, they send her 10 year old grandson to live with Addie.   He is emotionally messed up because of what has happened between his mother and father, but slowly improves thanks to the kindness of Lewis and Addie.
Addie's son however can't handle the fact that Addie is "living in sin" with Lewis, even though Addie, Lewis, and the boy have all benefited from the relationship.  His selfishness, pours poison into this beautiful relationship.
Like in all of the other Haruf's other novels that I have read, I was deeply touched by his simple style, his fully developed characters, and the humanity that springs from his characters.   This is another  good one.