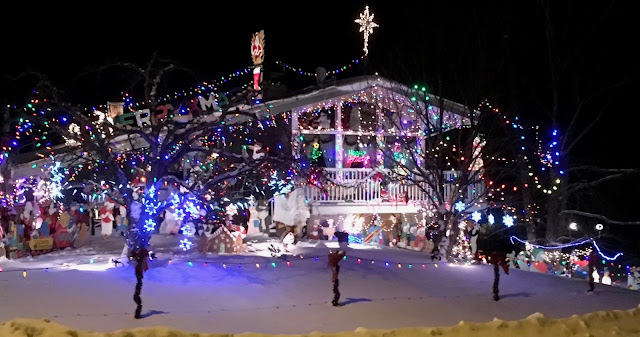 It seems that no matter in what community you go in North America during the Christmas Season, you will find one house, where the owners sort of go nuts decorating for Christmas.  The other night as I was digging out my instruments from the back of the car to take them to our Jam, I happened to glance over to the house across from the library and couldn’t help noticing just how over the top its decorations were.
You can’t see it all from the photo, it shows only one side, but there were lights, big inflatable figures, and wooden cutouts, surrounding and almost obscuring the view of the house.  I not only wondered about their electric bill, but also where they stored all this stuff during the rest of the year.
I seem to have a knack for remembering comical things from my youth.  Whenever I see a house like this I remember a cartoon that was in Mad Magazine.  It showed a row of houses along a street, all but one, where totally covered with Christmas lights and objects.  There was one small house sitting in the middle that was not decorated, except for maybe a small wreath on the door saying “Peace on Earth.”  One character, standing on the sidewalk was pointing to the undecorated house and saying, “I guess they aren’t very religious.”
Even in my youth I thought that pretty much summed up the super commercialization of the season.
In closing let me say, I have no problem with people getting carried away during the season, it does make life interesting for the rest of us, but I guess I just don’t understand it.
“Hah, Bumhug,”  the Scrooge in me says.

You can view my paintings at::  www.davidmarchant.ca
Posted by Life in BC's Robson Valley at 10:03