Evidence on the Trail 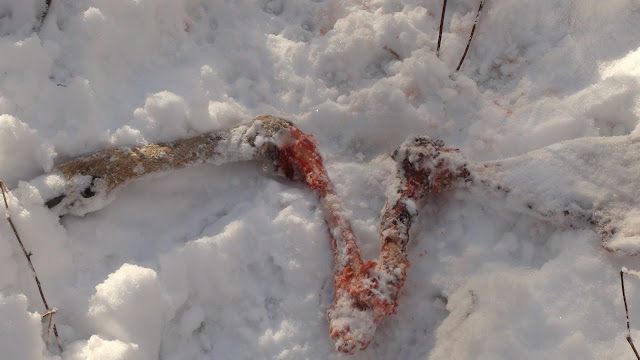 The other day when Skye and I were were walking the trail in the snowy woods, I was surprised when a raven suddenly flew up from the trail in front of us.  As I approached the spot, I saw why it was there.  Lying across the trail was the entire leg and shoulder blade of a deer.  I didn’t really try to investigate where the rest of the body was.  Today when we were on the trail and got to the place where the leg was, we spooked a bald eagle who flew out from an area off to the side of the trail, it was presumably feasting on the corpse.
The day before, I had seen what I assumed to be lot of wolf tracks criss-crossing the trail in various spots, after seeing the deer leg, I figured a wolf  or wolves had gotten their prey.  I come upon remnants of predator kills about every 2 or 3 years while just while walking on the trail.  The predators involved are usually either cougars or wolves, and coyotes for smaller animals.
Seeing this sort of thing always reminds me of all the dramas that continually play out in the bush that I am never aware of.  I only see them if they are on the trail.  While discovering such things are a bit distressing, it is the way things work in nature, and predators need to eat too.