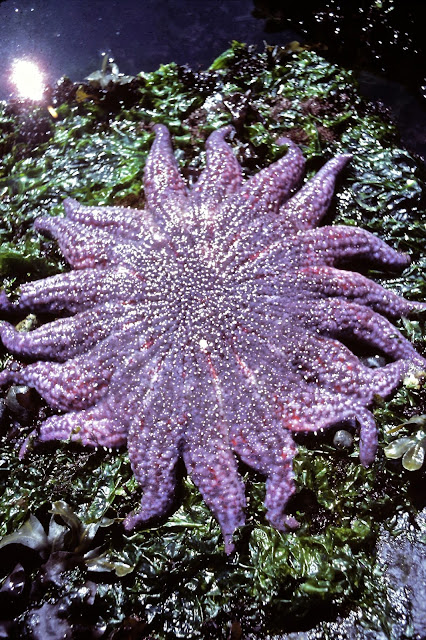 I haven’t been able to take any interesting photos lately, so in desperation, I started looking through my box of old slides to see if I could find anything to blog about.  I came upon this photo of a starfish I took in 1975 and it reminded me of something that is tragically effecting to sea stars all along the Pacific Coast of North America--they are all being killed by some unknown pathogen.
Back in 1973 when we first traveled to Vancouver Island we were fascinated by the rocky shoreline of the Pacific and all of the life that lived in the intertidal zone.  Big orange and purple starfish clung to the aquatic plants when the tide went out.  There were hundreds of them.  I had never seen sea stars except in photos and was surprised to see that many had more “arms” than just the five I suspected.  That is why I took this photo of this giant.
I have been hearing on the news that sea stars are now disappearing at a very alarming pace.  Their body parts just start to dissolve and they die.  It spreads from one to another, and can’t be stopped.  This was first noticed in Sept 2013 on the B.C. coast, but it is occurring from Alaska to the Baja.
Scientists haven’t been able to figure out exactly what is killing them, but think it is some kind of virus-like organism that has taken hold because of the warming temperatures of the ocean.  It is the cold water on the Pacific Coast of BC that holds more oxygen which enables the abundance of sea life here.
This is yet another example of how, bit by bit, the diversity of wildlife is being eliminated by global warming.  I’m sure you have heard of similar examples where ever you live, things you used to see that are no longer there.