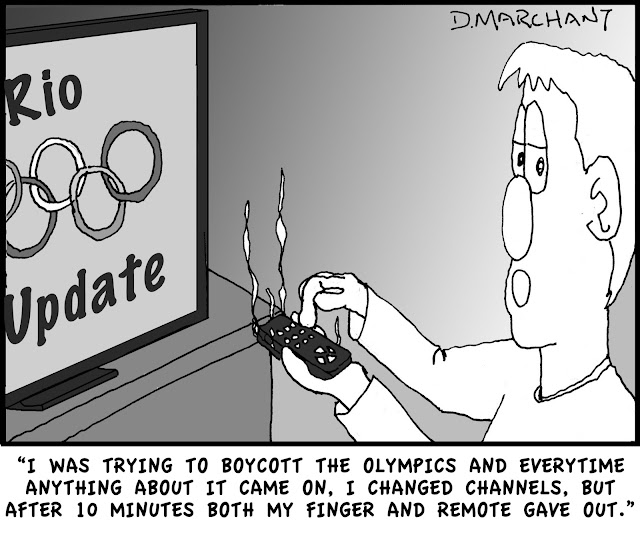 I am not a fan of the Olympics.  I am too political and see the Olympic organization as a rich man’s club that exploits athletes and host cities so the Olympic Committee can rake in the cash, so I purposely don’t watch it.  (Did you know that host cities are required to have a special traffic lane set aside, just for the Olympic Committee members to use?)
As the cartoon implies it is extremely hard to avoid the Olympics even if you really try.   Here in Canada, the CBC (Canadian Broadcasting Corp) paid a huge amount of money to get the broadcast rights for “The Games” (a registered trademark to be used only by those corporations who pony up the money to the Olympic Committee) and so the CBC is saturating the radio and TV with Olympic coverage.  All of the hype started long before the actual thing started, and I am sure after it has ended we will be getting all kinds of shows about its highlights.
I listen to CBC radio daily, and now everything I listen to is interrupted with “Updates” about which Canadians won, or lost, and how their parents or hometown communities are reacting.  The other day I was listening to the radio to a distraught mother who had just begun to tell about her addicted daughter and the trouble she was having trying to find help, when suddenly there was the blare of trumpets and she was replaced by an Olympic Update.
The CBC main channel is naturally full of the Olympics, so I try the CBC 24 hour “news” channel, a place where you might expect to hear news, but again the first 5 stories are taken up  by, you guessed it--the Olympics, then after a brief summary of actual news, they go back to Olympic fluff pieces.  Even though I have really tried to avoid it, I know all of the Olympic stories, just be because it is impossible to escape it.  I know all about who won, who was a disappointment, the green swimming pool, the booed Russians, the athlete that got robbed--Please, just give me a break.
I realized that many people enjoy watching the Olympics.  Joan likes to have it on while she quilts, but she is continually upset too, but for her, its because of what sports are covered and what are not.
Sorry for being such a grump, but it ought to be said that not everyone out there is enamored by the Olympics.

You can see my paintings:  www.davidmarchant.ca
Posted by Life in BC's Robson Valley at 09:55