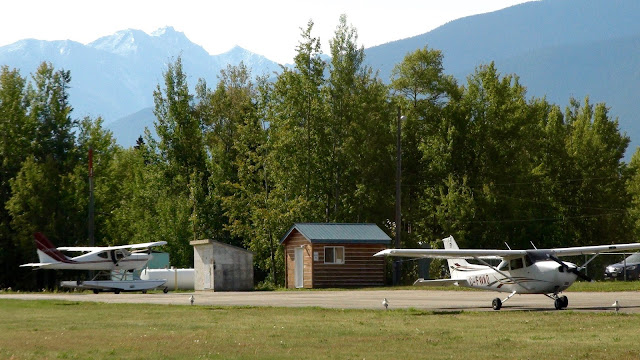 As I have commonly blogged, we often walk Skye at the McBride airfield.  We walk down the tarmac and back.  It gives us good views of the Robson Valley, and its better than walking on a road because there is no traffic.  It is rare that there is any air traffic either.  We watch the runway lights which go on if there is an aircraft, and of course listen for any sounds of an airplane in the area.
We were surprised yesterday when we pulled up to the airfield to see a small plane sitting there and two men standing beside it.  When I got out of the car I asked them if they would be taking off soon.  They said they had just landed and were wanting to go into McBride for a coffee.  They asked me if there were any taxis.  I told them no and then they asked how far it was to walk and I told them 10-15 minutes.
I then offered to drive them into town while Joan and Skye started on their walk.  They had never been into McBride and I must say our small village looked good on such a beautiful day.  I dropped them off at The Beanery at the Train Station and drove back and rejoined Joan.
As we were walking back on the runway, we heard, then saw a float plane circling for a landing so we  walked over to the grassy area beside the tarmac and watched the plane land.  They had been camping at Azure Lake and were looking for airplane fuel.
As we got back to the car we were full of amazement at what had happened:  Two planes on the same morning-- a real “Red Letter Day” for our lonely airfield.