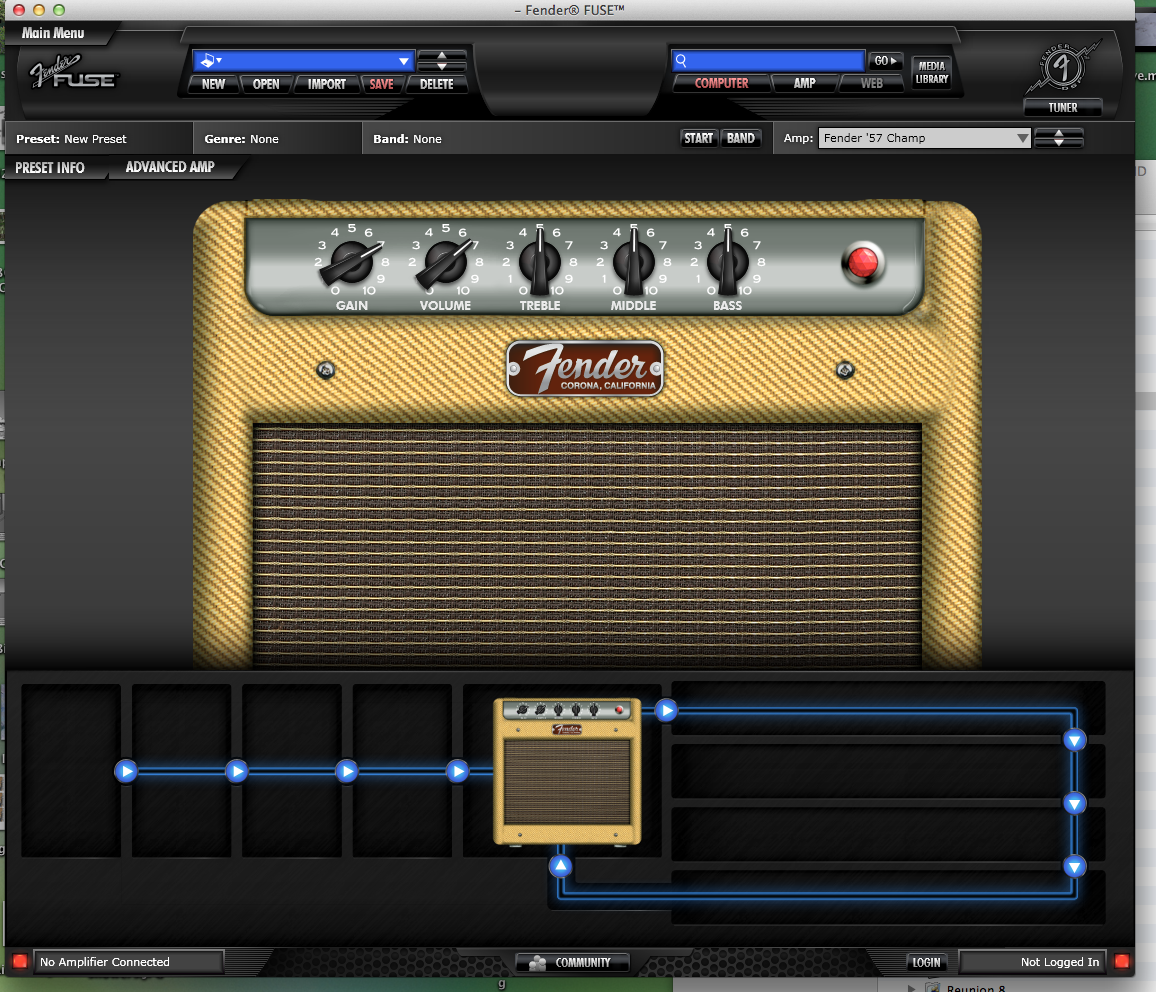 I am happy to report that my electric guitar amplifier has been reborn.  I reported a week ago about how I was supposed to be able to change the basic sounds of my amp by plugging it into my computer and using software that came with the amp.  Because of a flaw in the software, I ended up with an amp that could do nothing, but blink a red light.
I contacted the support staff at Fender, reported what happened and was told that they were aware of problem and to just hang on because a “fix” was just a couple of days away.  At the time I wasn’t sure if this was a delaying tactic similar to “a cheque is in the mail”, or a real fact.  Luckily, the guy was being honest, because a few days later, they sent me an email with a link to download the new version of the software.
I installed it on to my computer, started it up and I works!  Above you can see a screen shot of it.  You can choose a variety of old Fender  or other kinds of amps like Vox, from the software, then “turn” the dials on that screen amp to adjust the sound to what you want, then that sound is put into your amp.  You can also add all kinds of “Foot pedals” or “Stomp Boxes” to alter the sound even more, but I’m not interested in that.
I plugged my amp into the computer and picked out the sounds I wanted my guitar to make, then once that was done, I re-christened my amp, by playing through a lot of the old songs I like, using the new choices of programed sounds in my amp.  I played, “Cinnamon Girl”, “Sunshine of Your Love”, “I Can See For Miles,” Oh, Darling”, “Turn, Turn, Turn”, and “You Keep Me Hanging On” (Vanilla Fudge version)-- All songs with guitar parts I like.
As you can tell from the song list, I am musically, pretty much stuck in the past.  I read once that a person’s musical tastes are formed between the ages of 15-25 and that is pretty much what they stick with, for the rest of their life.  I confess it seems to be pretty true for me.  Although, I occasionally hear some new song or artist that appeals to me, usually they are in those same musical genres that I loved during those informative years of my life.
It is sure nice to have the amp working again, and I have been using it daily since it has returned to life.