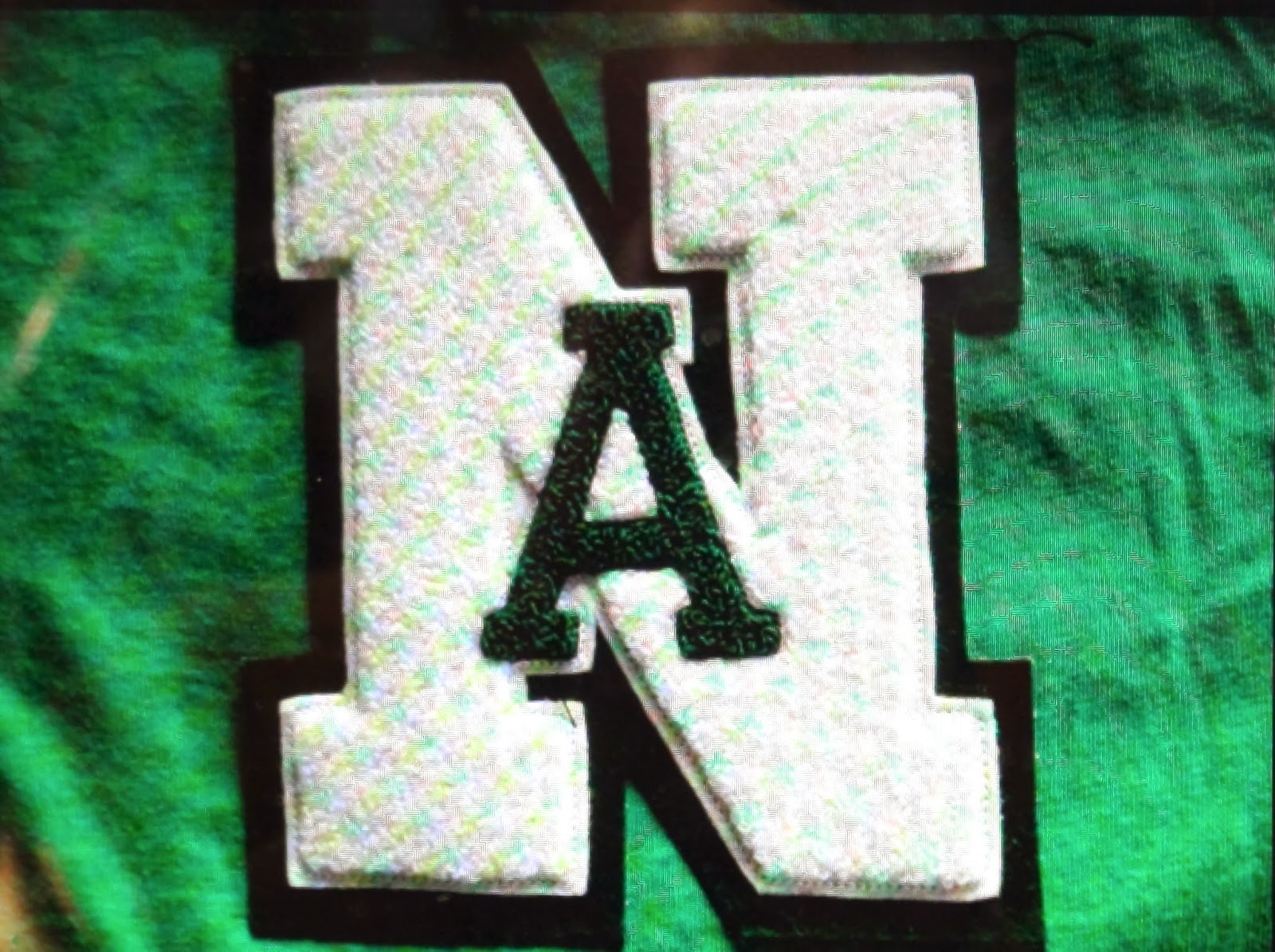 My recent blog recounting the encounter I had with the high school vice principal, the day after the Beatles appeared on TV, made me think of high school and a blog I wrote 3 years ago about my letter sweater, and since not much is happening around here for me to write about, and way back then, I had very few readers, I thought I would drag it out again.

For those of you who didn’t grow up in the US, or in those long ago times, I will start by explaining what a letter sweater was.  It was a sweater given as a reward to athletes for being on a varsity sport team.  It was a heavy-duty, V-necked, quality wool-knitted sweater in the school colors, (in my case, Kelly Green) and right smack in the center of the chest, was a big white letter--the initial of the school, (in my case, “N” for North High School).
The big letter had little symbols on the corners to signify what sport the wearer participated in, i.e. a football, basketball, etc.  In my case, it was a little shoe with wings, because I had earned my “Letter” running hurdles on the track team.
Anyway, in those days, wearing a letter sweater was “big status” at the high school.  The wearer could walk around wearing it and everyone would see that you were “Somebody”.  Unfortunately for me, since the track season was at the tail end of the school year when the temperatures were already getting hot, and I got my sweater at the end of the track season, I never got the opportunity to parade my big status around, since it was  practically summer and way too warm for wearing sweaters, so it just remained in its box.

In the early 1980's, I was living amidst the mountains near the Village of McBride, British Columbia and working for the BC Forest Service, and one day while rooting around looking for something, I came upon a box, that had been stored away, and there inside, was my North High School letter sweater, still in virgin condition (evidently, I had dragged it all the way from Indiana, up to Canada).  This once honored item had, by this time, lost its status and had become something that just took up space.
With its status gone, I figured I might as well just use it for warmth, so I began wearing it.  An urban hippy couple from Toronto, who were related to a friend of mine, had recently moved to a very tiny, isolated hamlet near McBride.  (McBride is pretty isolated itself).  They were a really strange pair, and instead of names, they called each other "Y" and "R".  When I was first introduced to them, I happened to be wearing my letter sweater and so they instantly took a liking to me, and they called me "N".
Periodically at Forestry, I helped out a “Beetle Crew”, whose winter job it was to snowshoe through the forests, looking for signs of spruce bark beetle, a small insect that killed trees.  One morning, as part of the crew, we were flown by helicopter out to a remote wilderness area in the upper reaches of the Goat River Drainage and dropped off.
We were to spend the day, snowshoeing through the bush, across the middle slopes above North Star Creek,  looking for signs of the beetle in the bark of spruce trees.  On this particular day, I happened to be wearing my letter sweater, and when the sun finally cleared the mountain range on the opposite side of the drainage, the day began to heat up.  More heat was generated from the slogging I was doing with the snowshoes.   Finally, I got so warm, I stopped, took off the sweater, tied it around my waist, then proceeded to trudge on.
At the end of the day, when we had all arrived at the pickup spot and were waiting for the helicopter to ferry us home, standing around in the shade of the mountain, exhaustion, and the cooling of the daytime temperature made me feel chilled.  I reached down for the sweater, only to discover that it was no longer tied around my waist--it had fallen off somewhere during the afternoon, somewhere on the slopes above of North Star Creek, which is still a remote and isolated area untouched by roads.
I often think of it, up there somewhere, and I wonder if the forest critters have taken it apart and used the strings of yarn to insulate their nests?  I wonder if some future explorer of the region will happen across the tattered big white "N" in the middle of the forest and scratch their heads?  It seemed appropriate to me, that if I had to lose my North High School letter sweater, what better place, than up at North Star Creek.

Please note that since I no longer have the sweater, I couldn’t take a photo of it for this blog, so I substituted my smaller “freshman”  letter, on top of a green T-shirt, to give you an idea of what my varsity letter sweater used to look like.

Since the topic today was my old letter sweater, here is a cartoon on the subject, that I did many years ago. 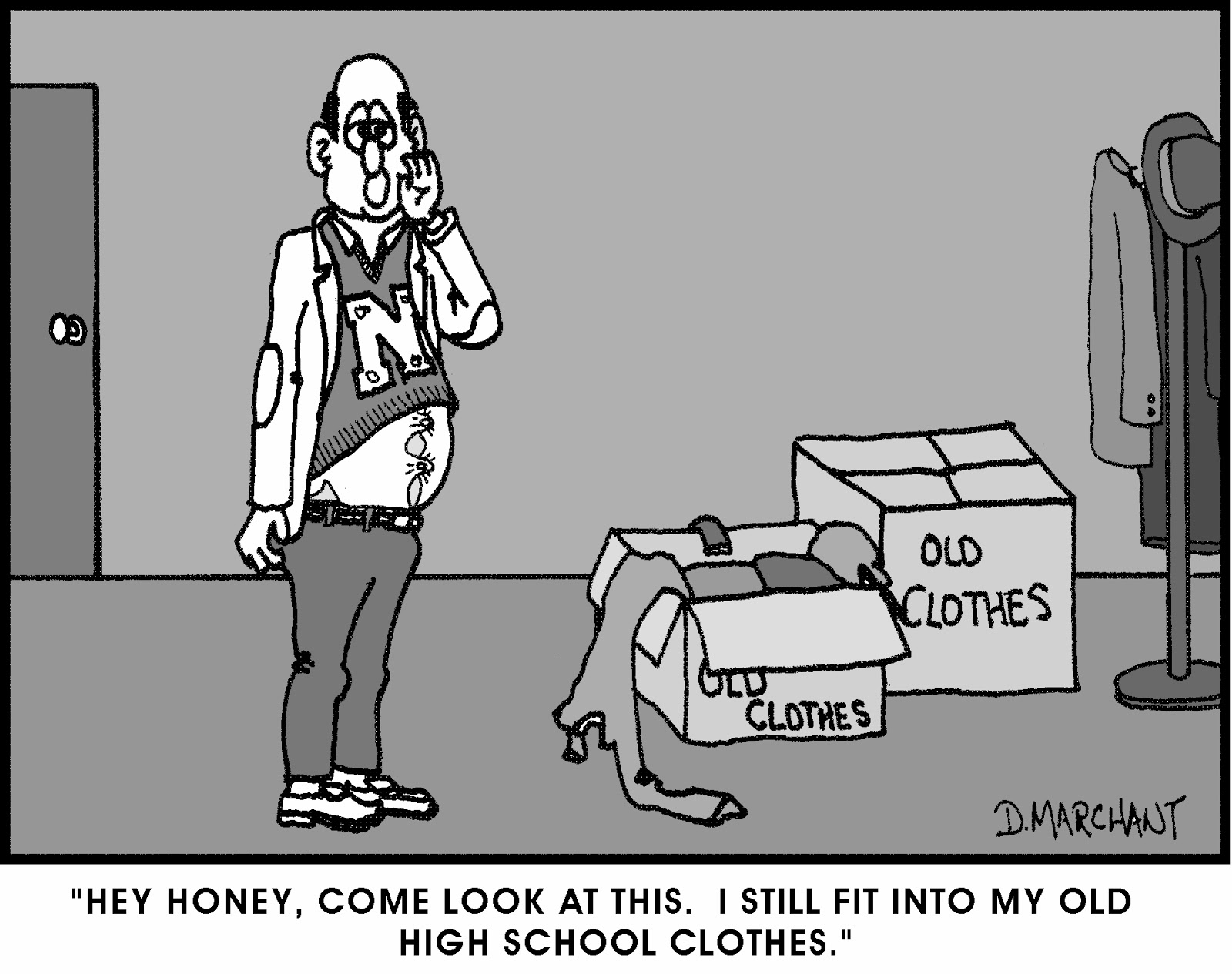