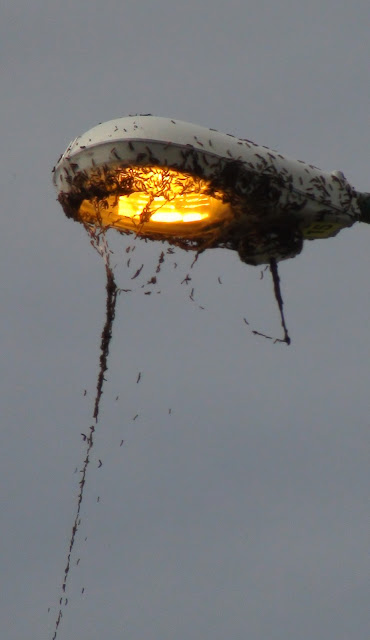 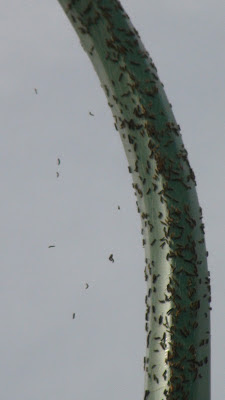 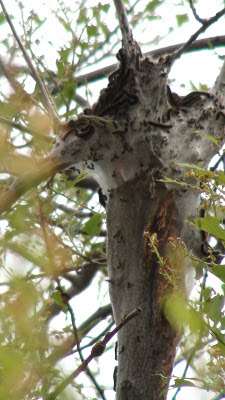 Yesterday, we had another one of our epic Prince George adventures.  We had to get a big service done on our car, and as a result, we had to spend 5 or so hours, killing time.  We used a lot of that time walking the streets in Prince George.  As we walked those streets, it wasn’t just time we were killing, we were also killing thousands of caterpillars.
Prince George is suffering an invasion of tent caterpillars.  The squirmy creatures were crawling everywhere.  Some were suspended in mid air, as they hung by webs, from the tree branches above.  We had to wave our hands to push them aside, as we walked along the sidewalk under the trees.  Later, I discovered a couple crawling up my clothes as I sat in the library, and again, as we waited for our car inside at the Subaru dealer.
Thousands of the caterpillars were on the move, inching their way across the sidewalks and roadways, as we traversed the city on foot.  Many of the trees we saw were left totally leafless, stripped by the voracious eaters.
I found the photo on the upper left, really interesting.  There were so many caterpillars on this street light, that they totally blocked its light sensor, keeping the street light shining in the broad daylight.  Naturally, all these caterpillars, were a big topic on the local CBC radio broadcast.  They mentioned that someone, during one invasion made wine out of them.  Sounds yummy.
In 2005, the Robson Valley had an invaded of tent caterpillars.  It lasted almost 3 years.  In hard hit areas, in large swaths of the valley, deciduous trees sported naked branches, as they do during the winter.  Caterpillars where crawling on doors and houses, dropping out of trees, and covering every horizontal surface with their droppings.
We were fortunate on Mountain View Rd, because the invasion collapsed just as they were beginning to show up in our yard.   Our trees were left pretty much intact, and luckily we were spared the sight of thousands, crawling around our house.
It seemed that there were so many caterpillars in the Robson Valley, that the birds got tired of eating them and just let them be.  A tree can usually last through 3 years of being leafless before it finally dies.  Hopefully, the Prince George invasion will be short-lived.