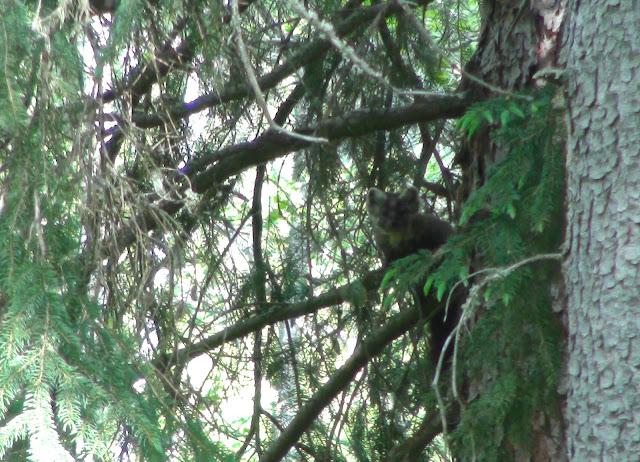 Yesterday, was another one of those rare days, when all sorts of wildlife were out galavanting around in the woods.  I blogged about the black bear we saw on our morning walk, and when we started out on our afternoon walk, we were wary of seeing the bear, so I thought I would make some noise as we walked so it could hear us coming.
Usually the late afternoon walk, I take some oats and corn along to scatter where the trail runs beside our pond, to feed the ducks (and inadvertently) the deer.  After I had emptied the plastic jar of the oats and corn, I just drummed on it’s bottom and whistled a happy tune as we continued down our trail.
Shortly upon entering the woods, I saw some commotion, and watched as a mother moose, and calf retreated deeper into the bush.  When we got to the field where we had seen the bear, it was empty, but a big hawk or raptor took flight.  When we re-entered the woods at the far field, we scared off a spruce grouse (a chicken-like bird).
Like I was saying, I was trying to make noise kept vigil as we walked, and through the high brush I saw movement in a tree.  When I got a clearer view, I could see a dark furry animal, but wasn’t sure what it was.  It was bigger than a cat, and it had a really furry tail.  I took two photos, and when I got home I looked it up in my BC Mammal book.   I decided it was an American Marten.
Martens are pretty elusive animals.  I have never before seen one in the bush.  They eat voles, insects, squirrels, and have even been know to finish off an apple pie that had been left in a window to cool.
Seeing a marten, was really a special treat for me.  They are usually only found in deep mature conifer forests.  This one was in a mixed forest mostly aspen, cottonwood, and birch trees, with only a scattering of spruce and balsam.   They are a sign of a healthy mature forest.
They are prized for their fur, and are sought after by trappers.  Hopefully, this one will have a long life in the neighborhood.

Visit my website  www.davidmarchant.ca  to read blogs from the last two years and to
view my paintings.