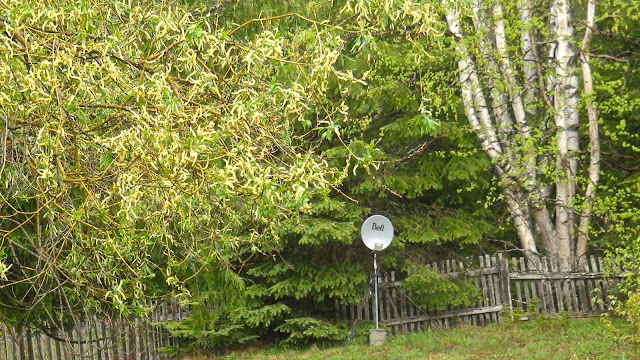 Yesterday, I told you about adjusting my satellite TV dish, using the big television set we had in our living room.  That reminded me of another episode that I had with the satellite TV dish.
In a normal place, when you buy a satellite TV system, an expert installer comes out to your house and sets it all up for you free of charge.  Living where I do, it is something I can only dream about.  McBride is so far away from any big city (135 miles, or 217 km), that no expert ever comes to set or repair anything for us.  There is no local set up person, so like everything else, it fell upon my un-expert shoulders to do.  Luckily, with a lot of trial and error, I was able to get the dish and satellite TV going.
For many years, I had the dish on my house, but our house is located rather close to the neighbor’s wooded property, and eventually his tree’s grew so tall, that it started blocking out my satellite signal and I had to find another place to put the dish.
This was a lot harder than I expected.  It seemed that in every location I checked, the satellite was either blocked by trees, or was too far from our house, causing signal loss from a long cable.
I finally settled on putting the dish in my barn yard, where I could get a signal, and was only 60 meters away.  Like I mentioned yesterday, I had to wheel our TV out there with the wheel barrow.  I also had to get power out there using a lot of extension cords, and take the satellite receiver machine out there as well.  I needed to attach the receiver to the dish with a cable and attach the receiver to the television with another cable.
Luckily, since I had been having to deal with this sort of thing several times before, I had several left over satellite cables stored away in my shop, and was organized enough to have them all in one spot.  I went to that spot to find myself some cables.  I found one the right length for the dish/receiver connection, but all the other cables were either too long or too short.
I finally decided to go with a big coil of cable which was much longer than it needed, but I chose it and I took it out to the dish.  I connected the dish to the receiver with the short cable, then grabbed an end of the cable in the coil and screwed it into the receiver.  I grabbed another end sticking out of the coil, and plugged that into the TV set.
The task then was to slowly move the satellite dish up and down and back and forth until I got the signal from the satellite.  I would know when I had the satellite, because the low drone sound coming out of the TV would suddenly become higher in pitch.  The higher the pitch the stronger the signal.
Because I had done this several times before, I knew roughly what part of the sky the satellite was in, and figured that it should only take me about 15 minutes to find it.
I stood behind the dish and slowly moved it up and down, then I moved the dish a little more to the south and did the up and down movement again.  I repeated this over and over, and got nothing.  I started the procedure again, repeating the movements.  Still I got nothing.  I couldn’t figure out why I couldn’t find a signal.  Surely the satellite was still up there.   I checked all my connections to make sure they were all tightly screwed in.
Everything seemed all right, so I tried again, and again.  I moved the dish back and forth first, then doing the up and down to see if that made any difference.  I rotated the dish over and over again.  I got no signal.  I had spent 1 hour and 45 minutes moving the dish around, and didn’t pick up even the faintest signal.  I was starting to get extremely frustrated and wished I lived in a place where someone who knew what they were doing, could be called to come out and figure out what was wrong.
I eventually decided to unplug all the cables and then start all over.  It was then that I discovered that the big cable coil that I had used, was actually two separate cables, coiled together.  I had screwed in the end of cable “A” into the satellite receiver, and the end of cable “B” into the TV, so there really wasn’t a connection between the receiver and the TV.  I felt a fool.
Once I had the two ends of the same cable screwed in, I quickly found the satellite and got a strong satellite signal.  I tightened the screws to hold the dish into that position and gathered up all my equipment.  With all my built up frustration waining,  I wheeled my TV and receiver back into the house, hooked it all back up in the living room, and finally sat down in my chair to enjoy my satellite TV once again.

To view my current painting, go to:  www.davidmarchant.ca