The Worst Night of My Life 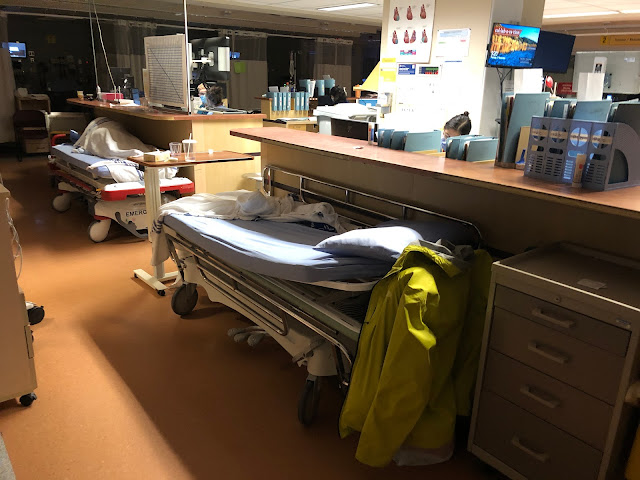 For weeks I have been seeing and hearing news reports about the severe strains that Canadian Hospitals have been experiencing because of the overcrowding.  The crowding was being caused by and explosion of SRV cases in kids, cases of Flu and Covid, and the shrinking of the medical staff because of burnout and resignations.     That all became real when I was sent up to the Prince George Hospital last week due my attack of Pancreatitis.  At the Prince George Hospital, there seemed to be a lot of staff, but there just wasn’t enough room for the huge influx of patients.

I was fortunately housed in a curtained room-like enclosure, but looking out I could see other patients whose “room” was just the hallway.  I felt very lucky.

That all changed on my second night, when they moved me out of my “room” and rolled my bed beside the counter of the central nurses station.  They needed my old space for someone with an IV and I had been taken off the IV.  That yellow jacket is hanging on the end of my bed, where I  spent the night.

I knew it would be a bad night, but I hadn’t realized, just how bad.  The photo shows what is was like during the night with the lights out.  I had to tuck my head under the counter, so it would be a little dark.  There were constant conversations going on throughout the night at the nurses station, there were continual beeps and buzzes of medical machines and monitors.

I did manage to fall asleep several times during the night, but only for short periods.  My dreams were full of rapid chaotic movements.  I certainly was in worse shape after that night than I was before it.  Fortunately, they released me from the hospital and I was very happy to be heading back home.