At the Prince George Hospital 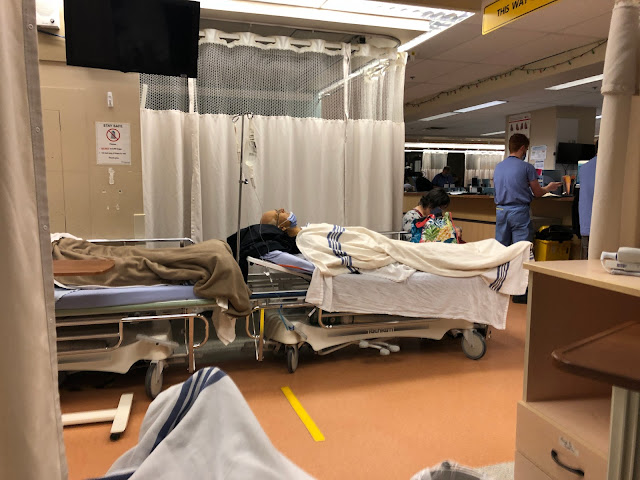 The photo shows the view beyond my covered feet, onto the line of patients bedded along the hallway of the Prince George Hospital.

Once I was delivered to PG, I was given blood tests, urine tests, an ultrasound, and a CT Scan in hopes to discover what exactly was wrong with me.  Like in McBride, my tests results were troubling, but even the CT Scan didn’t clarify the problem.  The physician declared it to be Pancreatitis, but the CT Scan didn’t show the expected blockage that was the suspected cause.   After 24 hours in Prince George, I was taken off the IV and started to be given hospital food.

As I lay there, I started to learn more about the other patients that were bedded around my me.  In the next cubical was a man in his late 50‘s whose name John, who had a bad heart.  He was awaiting a stress test that would determine whether or not he would be sent to a Vancouver hospital.   He told me that his father had died from a bad heart.  His father was not a good man, a traveling salesman, who the family later learned had 5 other families hidden away in the various places he traveled.

An 80 year old woman who whose bed was in the hallway was irate at being in the hospital.  Although her story wasn’t exactly clear, it seemed there were “hackers” living in her “house” that continually caused her problems, and disturbed the peace and her sleep.  She made an official complaint mentioning the fact that she couldn’t sleep and the official had her sent to the hospital, and there she was stuck.  Obviously, it was not a place where she would be able to get a peaceful sleep.

There was a ruckus caused by a Native man, who started ranting and cussing about the “fuggin” white people who were “touching” him, trying to calm him down and.  He loudly yelled that he just wanted to stab himself, and poke himself.  He screamed, “Help, help”, disturbing everyone on the floor, insisting that he was calm.  Eventually they did manage to take him away.

My dreams the first night were very rapid images, building, rebuilding, chaotic, and not very restful.  I woke often, but was able to return to sleep (and the chaotic dreams) quickly.  Conversations, the beeping on monitors, and lights continued through out the night.