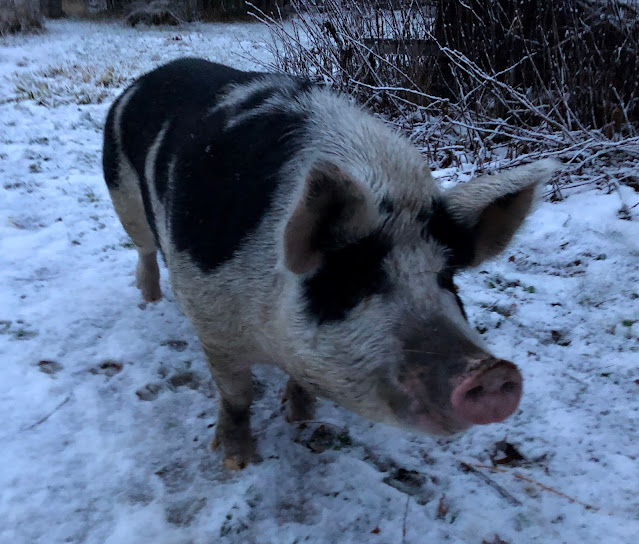 Our peaceful morning exploded into loud, uncontrollable, chaos, when my wife opened the door to  walk Kona.  Kona immediately knew something was amiss, charged away, madly barking, trailing her leash behind her.  When I  looked out of the window to investigate, my wife was sitting in the snow, arms holding Kona tightly against the garden fence, frantically trying to calm the dog, who was going nuts.  I went out into the dusky yard, to help, then noticed a strange big creature, slowly ambling toward me.

The low light didn’t help me figure out what it was.  It was white, with black patches around the eyes, and my first guess made absolutely no sense; it looked like a dirty panda.  As it got closer I realized it was a huge pig.  It didn’t seem at all aggressive, so I went to to helping my wife get Kona into the house.

Being inside the house didn’t do anything to stop Kona from barking, or going berserk.  I tried to calm her by shutting her in the upstairs bedroom, but all that did was muffle her terrible barking a bit.

There aren’t many people who own pigs nearby, and I quickly figured out where this one had probably come from.  As we ate our breakfast, the sow nestled down outside, beside the house, to rest.

I didn’t really know the probable pig owners but after I had eaten, I drove to their house.  Their front yard was a ramshackle of pens, shacks, and barking dogs.  I knocked on the door and all of their inside dogs started going crazy.  I asked the woman who opened the door if she was missing a pig.  She replied that she might be.

I described the pig and where I lived and she sounded like they would rig up a trailer and come and get it.  So far, an hour and a half later, we are still waiting.

Each morning when we wake, we sure don’t know what the day has in store for us.  Life is full of surprises and this one was sure unexpected. 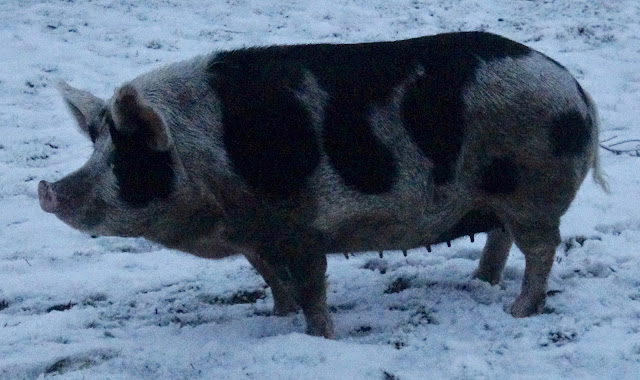 View my paintings at:  davidmarchant2.ca
Posted by Life in BC's Robson Valley at 09:44