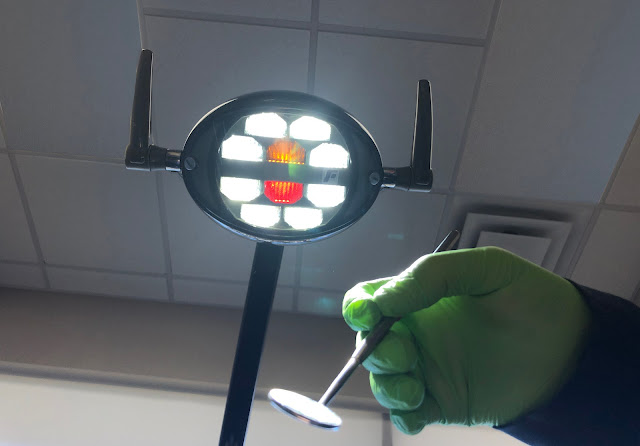 Weeks ago, while eating popcorn, I crunched down on an un-popped kernel and then noticed a sharp edge on a tooth.  At first I thought that a corn husk was stuck between my teeth, but soon after realized that part of the side of a tooth had sheared off.  It didn’t leave the tooth sensitive or anything, but the tooth’s sharp edge started to rasp against my tongue which made it sore.  Luckily I had previously made an appointment with my dentist in Prince George for a dental checkup on the following week.

When I went to the checkup, the dentist rounded off the sharp edge, and suggested that I get a crown put onto the tooth.   I decided that since the tooth was still firm and healthy, it might come in handy for chewing as I grow older, so I decided I would go for a crown.  An appointment was set for this last Wednesday to do the work.

Waiting for two weeks for the appointment, left me plenty of time to agonize over the procedure.  I knew it meant grinding down the top of the tooth, and that filled me with fear.

Since childhood, I have had a fear of going to the dentist.  I am sure it stems from my first dental experience that I had as a very young child.  I don’t remember it, except subconsciously, but I am sure it left me traumatized.  Here is what happened.

When I had my baby teeth, one of the two front teeth on the bottom started to discolor and turned  gray.  The dentist said it should be pulled and my parents took me in for the procedure.  When the dentist began to pull on the tooth, it soon became evident that the bad tooth was attached to the tooth beside it and that caused a lot more trauma for my young brain, as he struggled to get the two teeth out.

It didn’t help matters that I had a lot of cavities as a kid, and that our dentist never used Novacaine to deaden the pain of the drilling, so going to the dentist always meant sitting there suffering as the dentist ground around on a tooth with his drill.  I was surprised to hear the other kids in my class talk about getting a shot at the dentist’s that killed the pain when he worked on their teeth.

Like I said, I don’t remember any of this, but my mother had shown me the double-headed tooth, and I have always had a fear of dental work, and have a history of fainting during dental and medical procedures, many of which were absolutely painless, but my unconscious and deep seeded fear was always working overtime when ever I had to go to a dentist’s or doctor’s office.

Anyway, Wednesday, I went up to the dentist, and was amazed at how quickly and painless the whole thing went.  I was given a relatively painless shot to deaden the pain before the work began.  The dental drill was very fast and things proceeded quickly.  The only real pain I experienced was that my jaw began to ache because I had to hold my mouth open so long.

I am sure appreciative of the fact that the dental tools and procedures have improved so much during my lifetime.