The Golden Spruce by John Vaillant 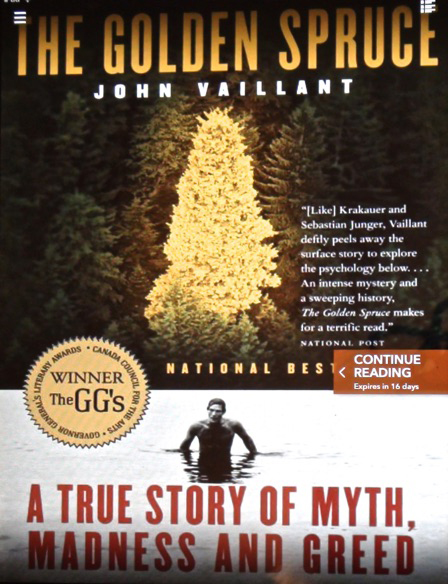 I am going to re-post a blog I did back in 2013 about the book, The Golden Spruce.  It is a strange true story about someone I once met.  The other day I was listening to CBC radio and they played a newly released song by Mark Perry about the incident and it brought the story back to me, so I thought I would put it out there again.

I have a horrible memory when it comes to remembering people’s names.  Half a second after being introduced to someone, I am standing there trying to remember what their name is.  I find it very interesting therefore, that I remember the name of a person who came into the forestry office in 1987 to get some maps.

I was the guy who was in charge of maps.  Whenever someone wanted maps of the area around McBride, it was usually me they came to see.  I can’t remember what maps this 39 year old man wanted, I don’t really remember the specifics about the encounter.

He was doing some kind of work for the local mill, probably logging road layout or timber cruising.  I must have talked to him for a while and I am sure my dissatisfaction with current logging practices came out in our talk  There must have been something I found interesting about that forgotten conversation, because even though I never met him again, 10 years after this brief meeting I still remembered his name:  It was Grant Hadwin.

At that time, growing on the shore beside a big river on Haida Gwaii (formally known as Queen Charlotte Island) which is off the wild BC Pacific coastline, there grew a big Sitka Spruce tree.  It was 300 years old and 50 meters tall.  That is not unusually huge for the area, but unlike other Sitka Spruce, this one had golden colored needles.  Even though it had this mutation, which should have been fatal, it seemed to thrive.  Because it stood out, against the sea of green trees, it became something of great spiritual importance to the Haida people, it became a mascot for the local town, and MacBlo, (a giant forest company), even put a bit of a reserve around it, as they clearcut most of the other forests around the area.

Even though I was totally unaware of the “Golden Spruce” tree, I and most of the people in BC, were shocked on Jan, 22, 1997 to hear the news that someone had swam across the river in the middle of the night with a chainsaw and cut down the Golden Spruce.  I was even more disturbed later when I heard that the RCMP had charged someone named Grant Hadwin with the deed.

I wondered if it was the same Grant Hadwin I had met in the forestry office, but I was never able to find out until I had a conversation with Naomi, our librarian, and she mentioned that the man who had been in charge of our local lumber mill had been interviewed by John Vailant, the author of the book, “The Golden Spruce.”  This of course, really spurred my curiosity and that night I downloaded the book from the library onto my iPad and began reading.

Here is what I learned:  It was the same Grant Hadwin.  He had become very disillusioned with all of the logging that was eradicating BC of its old growth forests, especially on the coast of BC.  He was sort of a superman when it came to his physical abilities, his capabilities to do layout work for forest companies, and his toughness when it came to living out in the wilderness.  He was in McBride because he took a layout job for a local lumber mill, and the mill was very pleased with his work.

He then took 10 days off, went up to camp on a mountain near McBride, and when he came down he was changed.  He had some kind of mystic experience, his former environmental “sins” had been forgiven, and he was “chosen” by the “Creator of All Life” to show humanity the error of their ways.

When he returned to work, there was something spooky about his eyes, and when he told the mill manager that what they were doing was wrong; he was let go, and disappeared from the area, but it seems that maybe something had been planted in his head while on the local mountain, which set him off in a direction that would forever link his name with infamy and mystery.  He cut down the Golden Spruce, he disappeared and never made it to his court hearing, and no one is quite sure if he is dead or alive, but his broken up kayak washed upon the shore in Alaska.

“The Golden Spruce” is a very interesting read, and is full of facts about BC’s coast and Grant’s unusual life.  I found it’s references to McBride of special interest, of course, but it was full of facts  about BC’s history, biology, and its forest industry.

I read through my 1987 diary to see if I had written down anything about Grant Hadwin, but  I found nothing.  I sure wish I could remember what we had talked about.  We shared the same opinion about the forest industry, and assume that was the common ground we discussed, but I don’t honestly remember.

His act of protest in cutting down the Golden Spruce was useless destruction.  It totally alienated everyone:  environmentalist, logging companies, natives, and most of BC.  In his attempt to show the hypocrisy of the forest industry (who saved one special tree, while wiping out whole mountainsides) Hadwin did something that totally backfired, making him the target of hate, instead of the forest industry.