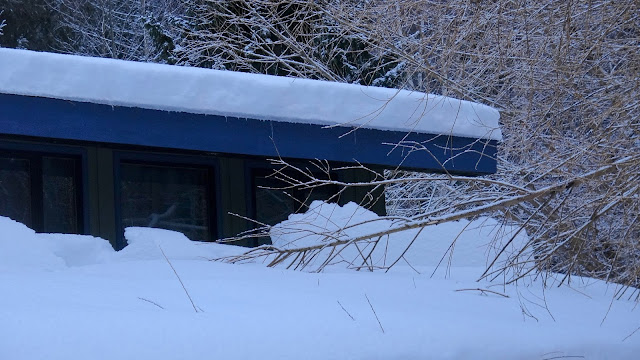 Over time, snow has been building up on my roof.  Then when milder temperatures arrived, like a glacier the snow began slowly moving downslope.   When it got to the edge of the roof, it started arching out into the air.  Of course eventually so much was out in the air that the ice/snow mass behind it could no longer support its weight and it broke; crashing onto the roof below.  You can see the big pile by the branch that is laying on the snow.

When the snow/ice broke loose and hit the roof below, there was a loud kaboom which reverberated through the whole house.  Kona was so freaked out by the noise, she hurried back to the the security(?) of the carport door, where she stayed for an hour.

No harm was done by the crash, but it sure informed us about how much snow can weigh.

You can view my paintings at:  davidmarchant2.ca
Posted by Life in BC's Robson Valley at 09:23