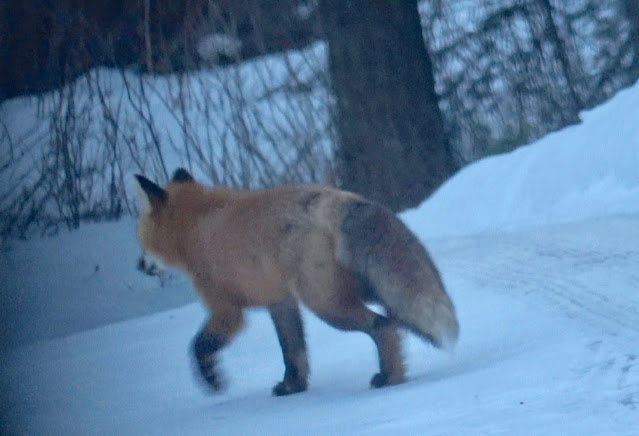 This morning as I was putting my bowl of oats onto the table, my eye caught a movement in the window and I looked up just in time to see what I at first thought was a coyote walking along our picket fence.  I abandoned my breakfast and ran for the camera as the fox rounded the house, and when I finally got the camera out of its case and turned on, I located the critter walking up to the driveway.  As I began videoing it, I realized from its thick fur and fluffy tail, that it wasn’t a coyote, but a fox.

I filmed the fox as it walked up the driveway then up a pile of snow beside the driveway, before  disappearing behind the shop.

I don’t see foxes very often, but certainly they are around.  I have read that they like to exist in the areas close to people, because that gives them some protection from coyotes, who tend to stay further away from people.

My first encounter with a fox was at night.  I had just walked out to the woodpile to get some wood an as I stood there, with an armful of wood, I saw a fox, following some scent in the snow, walking right toward me.  It was so concentrated in the scent it was following, it didn’t seem to realize was standing there.  It just got closer and closer.

Finally I cleared my throat, so it would be aware of my presence.  The fox glanced up at me, but without seeming very perturbed, then it just turned and with out any panic, proceeded off in another direction. 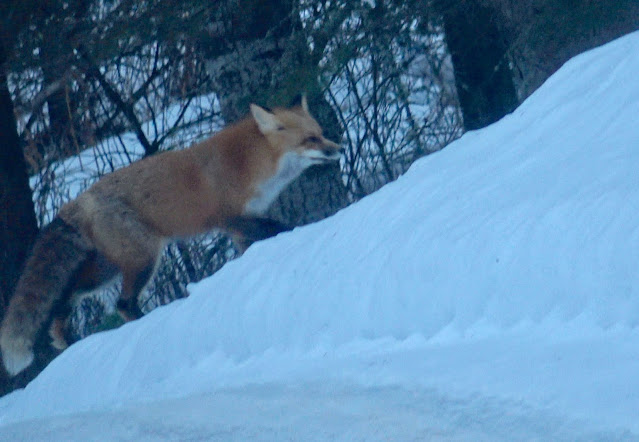 Take a look at my paintings:   davidmarchant2.ca
Posted by Life in BC's Robson Valley at 09:26