Trading One Problem For Another 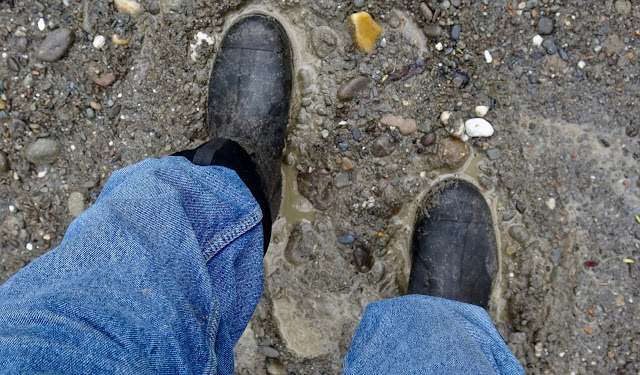 Our property is largely heavy clay.  Over the years we have had to put several loads of gravel on our driveway because over time the gravel slowly sinks and disappears into the clay.  It has been a while since our last load of gravel, and last summer’s constant rain turned parts of the drive into goop.   As the snow melted this spring, the runoff water again permeated our driveway, causing the clayey goop to return.  I figured it was time that I get more gravel on the driveway.
I knew that you shouldn’t put gravel on when the surface is still gooey, so I waited until the surface dried out and got hard.  Then yesterday I saw the gravel truck go up the road, so I got in the car and followed him the couple of miles to the cement “plant”.  The owner, who was driving the truck said he would deliver the gravel right away, which he did; two giant truckloads.   He spread it the whole length of the driveway.
The “gravel” is really a mixture of sand and different sizes of rock (a mixture like what is used in making concrete) that had been taken from a sandbank along the river.  I spent a lot of time, until I was worn out, raking the gravel to try and even it out.  Then last night it rained, it rained heavily.  This morning I commented that it was good that I had gotten the gravel because otherwise all the sticky clay  on our driveway would have turned to mud.
I was a bit premature in being optimistic, because the rain totally saturated the sand/gravel that now coated my driveway, and when I went outside the morning and walked on it,  my boots sank into a  slurry that was now my driveway.  It has the texture of very soupy cement before it dries.
In a perfect world, I would have had time to drive over the mixture many times to try in make it more stable, but all this rain nixed that.  It will take some time for the mixture to settle and dry, and until it does I think my driveway is going to be a mess, not muddy, but still a mess.  By getting the gravel before a heavy rain, I just traded one problem for another. 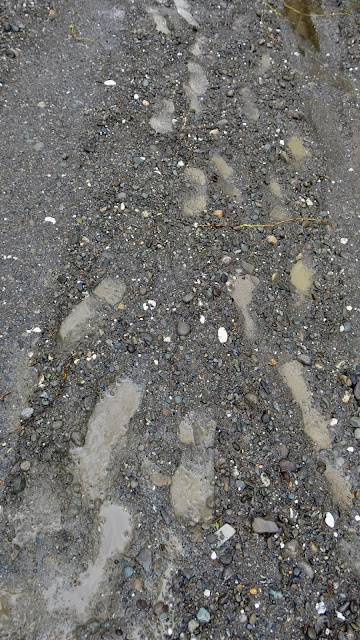