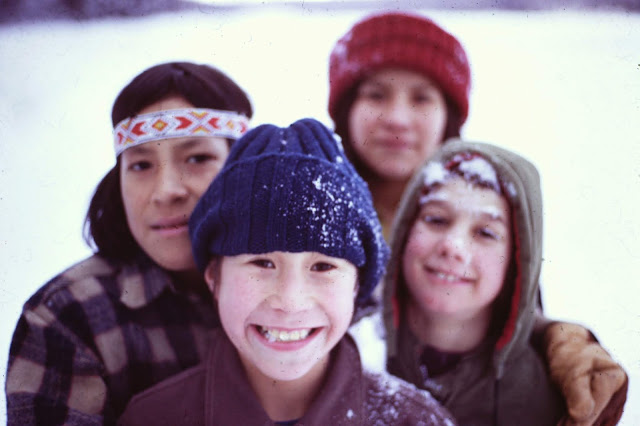 The other day when someone mentioned the last letter of the alphabet, “Zee” to Americans, but “Zed” to Canadians, my memory flashed back to my first day of teaching in a one-room school deep in the Interior of British Columbia.  I had taken the teaching job as someone who had grown up and was educated in the US, without ever having been in a Canadian School, so I had a lot to learn.
There had never been a school in this logging camp on Takla Lake, where I had taken on the job.  I was to set one up a one-room school and run it.  It was a daunting task, considering my lack of knowledge of Canadian schools and having absolutely no experience or knowledge of how to manage a one-room school.
At least on that first day, I didn’t have but four students, just the children of a local First Nation’s family.
I had no experience being around First Nation children.  They meekly entered the room which was in the logging camp’s Recreation Hall (there was no school building that first year) and I welcomed them and motioned them over to sit around a table which I had set up.  Once I had them seated, I began to talk to them in an attempt to find out their names and ages, so that I could get a sense of where they were academically.
To my dismay, all I got was bowed heads and silence.  I couldn’t get them to even look at me, let alone speak.  It was a horrible and inadequate feeling that overtook me.  (I found out later that First Nations people consider it rude to look people straight in the eye, so they probably thought negative things about me on this first introduction.)
Luckily, after a time, I gained the confidence of Ralph, who I later determined was about at the  third grade level, and he began to open up a bit.  Soon, the others began to timidly join the conversation.
I got another surprise, when I urged Ralph to recite the alphabet for me.
“A,B,C,D,E,F,G…”
“That’s great, Ralph, go on.”
“H,I,J,K,L,M,N,O,P,
I was beaming.  “Keep going Ralph”
“Q,R,S,T,U,V,W,”
“Great, finish up,” I encouraged, and nodding my head to indicate that he was doing great.
“X, Y, ZED.”
“ZED?”, My head jerked back in surprise, I had never heard of “ZED”,  “What’s ‘ZED?, you mean “ZEE”.
“No,” Ralph replied confidently, and all his siblings confirmed and chimed in, “ZED!!!”

This was the first lesson in the school and it was a lesson for me.  I had just discovered that Canadian English and American English was not the same.  Canadians didn’t have a “ZEE” at the end of their alphabet, they had a “ZED”.