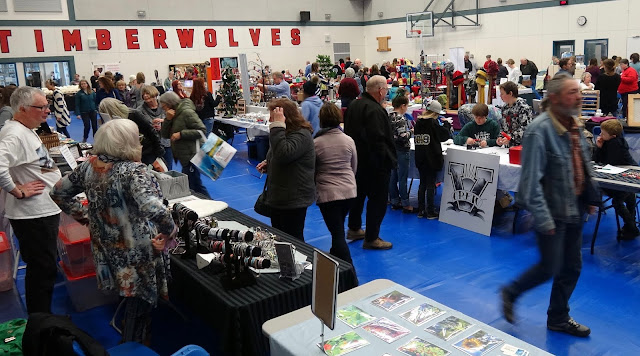 Yesterday was the Valemount Christmas Fair, the last of the season’s fairs that I participate in.  In the past I have been able to sell prints of one of my paintings in Valemount, so I made a special trip to the Whistlestop Gallery in McBride to pick up the only copy of my truck painting prints, so I could have it as well as all of the others in Valemount.  I added it to the box of other prints I planned to take.
I loaded up the car with things I wanted to take to the Valemount Fair the night before.  I took a couple of easels, and a couple of my guitar stands to hold the prints for display.  Yesterday when I left for the Fair it was starting to snow pretty hard so I was a bit worried about the hour’s highway drive.  There was slush on the highway for 2/3rds of the trip, but then the snow disappeared and the highway was dry.
I got to the Valemount High School Gym and started setting up my table.  I laid out all of the art cards of my paintings and my calendars.  I  set up the easels to hold the prints of my paintings.  It was then I discovered that I had forgotten to put the box of prints into the car, so I had none to sell.  I was pretty disgusted with myself for the oversight.
A woman came up to my table and said, “There you are.  I need a calendar.  That is the only reason I came to the fair.”
Its nice to have dedicated fans, and it made me feel good.
I often tell people to look up their birthday on the calendar to see what trivia happened on that day.  I told one woman to look hers up and discovered her birthday was Feb. 29th, and 2020 will be a Leap Year.  She told me that will make her 11 years old on her birthday.
A small boy came up to look at the calendars which were open on the table.  He started asking questions about it.  It surprised me because he didn’t seem to know what a calendar was or how it worked.  I wondered if it was the result of all the modern technology that have replaced so many things we took for granted.
While I did well at the fair, I didn’t quite sell as much as I normally do.  That seemed to be the the opinion of some of the other vendors.

Take a look at my paintings at:  davidmarchant2.ca